A sweet summer slot from Thunderkick featuring multi-colored ice cream scoops with scatter wafers, a 96.3% RTP and high variance! Offers big payouts in the free spins bonus round, and the chance to land up to 100x multipliers. 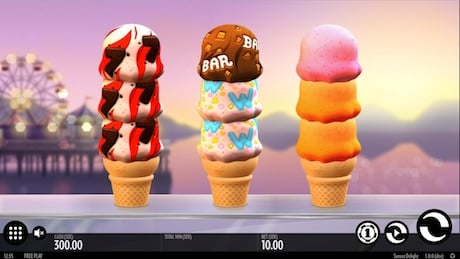 Where To Play Sunset Delight

Thunderkick fans were treated to an upgrade on an old  favourite in 2016 when Sunny Scoops Slot was re-furbed and given a new engine with a turbo-boost before being put back out on the road as the now famous Sunset Delight Slot.

This simple, but high variance game is set in an old English seaside town – you can check out the ferris wheel and fairground in the background.

Sunset Delight is notable for its fast gameplay and zooped-up bonus round where additional scatters can land you more and more re-spins and the ever-increasing multipliers (up to a maximum of 100x).

Sunset Delight Gameplay – How It Works

There are no reels as such in this game – typically, Thunderkick have put their own twist on the classic slot format.

Instead, three ice cream cones form the base on which scoops of ice cream are placed, three high on each. There are the reels, and you must make paylines of matching ice cream flavours to win a prize.

With each new spin the ice cream cones are moved away and three new ones come into play. Prizes start at 1x for the lowest value ice cream flavour and increase to 15x for the Chocolate.

The Wild symbol is also high paying at 15x for three in a row (as well as substituting for all others except the scatter).

So, to move on up from the base game and start playing for the big bucks you’ll need to land three or more of the scatter (wafer) symbols.

Initially you’ll be credited with 5 FREE SPINS. But you can claim more …

Multipliers move up by increments of 1 initially, then 2, then 5, then 10, then 25. At the end of the Free Spins all your wins are calculated and then your multiplier is applied to them (maximum 100x!). And that’s your lot!

How To Win at Sunset Delight

Slot games don’t come much simpler than that, do they? But still, here’s a little guide that might help you find those winning combinations.

When Sunset Delight arrived in our casinos in 2016 Thunderkick fans quickly saw this as an upgrade on the previous incarnation, Sunny Scoops.  The true delight here is in the tricky but high-octane bonus round where you can quickly find your winnings going through the roof if you land consecutive 1+Steps and 1+Spins wafers.

If you like this kind of action you can find more in other high variance Thunderkick titles like Fruit Warp.

Like all high volatility slots, Sunset Delight can make or break you in one sitting, so tread carefully and keep your fingers crossed for a winning streak, because when it pays, it pays large!