Norse mythology enthusiasts are already most likely big fans of Thor’s might and fury, but let’s not forget about his father Odin? The Allfather rules and protects Asgard, towering above all else in both power and wisdom. When fury takes over the ruler of Asgard, he wreaks havoc amongst his enemies. As it turns out, Pragmatic Play has shone a new light on the might of Odin with their latest Megaways slots release, Fury of Odin Megaways. 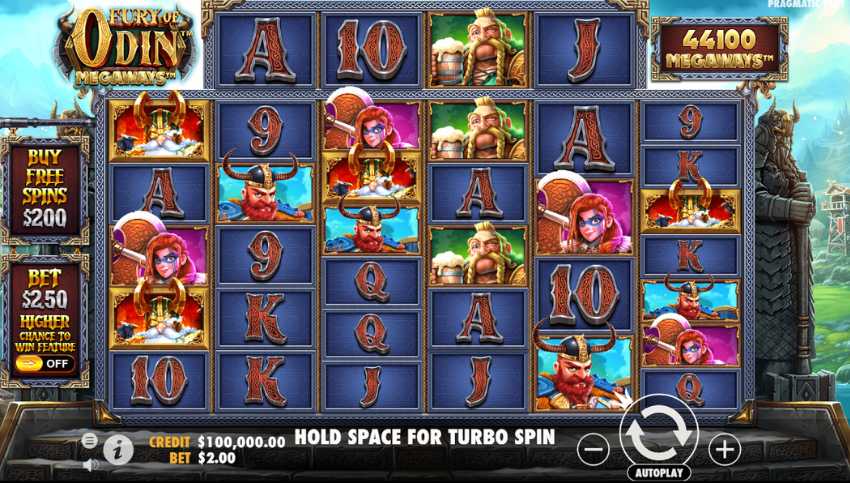 Where Can I Play Fury of Odin Megaways Slot?

ABOUT FURY OF ODIN MEGAWAYS SLOT

The Fury of Odin Megaways slot is played on a 6+1 grid layout where six vertical reels involve the greater chunk of action, while an additional horizontal reel at the top is only four cells wide. Big Time Gaming’s Megaways engine adds to the reels maths and takes the paylines up to 117,649 ways to win.

Bets start with a minimum deposit of 0.20 coins, while the maximum bet amount is limited to 100 coins per spin. Using the Ante Bet option increases the bet size by 25%, thereby increasing your chances of triggering the bonus round. Flexibility in betting range invites players to wager strategically in a game that boasts a max win potential of 15,000x the stake.

Pragmatic Play is a dynamic game provider releasing exciting slots with unique designs and payout models. If Norse mythology doesn’t attract you much, there are plenty of other Pragmatic Play slots you can try, like Santa’s Great Gifts, Towering Fortunes, Spin & Score Megaways, etc.

Fury of Odin Megaways slot centres around major Norse gods like Odin, Thor and Freya. The power of these deities adds a dollop of excitement when playing this rendition by Pragmatic Play. While the one-eyed Odin looks furious enough, most of the other gods seem to prefer cracking horns of ale instead of skulls.

Symbols can be neatly divided into two groups: 9 to A regular pay symbols, plus four Norse gods led by Odin. While the low pays provide 0.4x to 1.5x the stake, premium winning symbols offer 2x to 10x the bet for landing a six-of-a-kind winning combination.

The Wild symbol does not offer any payout but substitutes for all paying symbols and represents their value.

Fury of Odin Megaways RTP of 95.97% falls short of the industry average by a tiny margin. While any Return to Player above 95.50% is acceptable, slots flexing RTP above 96% are deemed highly favourable.

For a game paying the maximum win of 15,000x the stake, the variance levels are expected to be very high. And so is the case with Fury of Odin Megaways, which gets a 5 out of 5 volatility rating.

Apart from Odin, all pay symbols must land in a group of +3 on adjacent reels to qualify for payouts. The Odin symbol pays even if two of them appear on a spin. Note that the win line must be in a left-to-right formation, starting from the leftmost reel.

With the Fury of Odin Megaways slot, the creative team has kept the gameplay straightforward. But once you trigger a feature, several new aspects are revealed.

After a winning combination occurs, matching symbols are removed from the reels, and the remaining symbols on the reels fill the empty positions. A mixed set of new symbols drop from above, and if it leads to another win, the tumble process repeats. When no more winning combinations are possible on the grid, the feature ends, and the total win amount is paid.

Whenever mystery symbols land during the base game or free spin, they reveal the same symbol type before the final win amount is computed.

The feature might randomly trigger during a non-winning spin. If it happens, the feature rearranges symbols in a new order to provide the maximum possible winning ways with a guaranteed win of at least 10x the stake.

Moreover, if the creation of wilds does not yield at least one win, they remain in their position while the remaining reels respin during the Fury Feature. Respins continue until a win with wild symbols occurs. Furthermore, the number of wilds created by the Fury symbol increases by +1 for each respin, up to 6.

Also, for the Fury Feature each respin guarantees a minimum number of winning ways:

Landing four scatter symbols that spell out ODIN triggers the free spins feature. The feature starts with 10 free spins and awards 2 extra free spins for each additional scatter on screen. Bonus spins start with a x1 win multiplier which increases after each tumble and does not reset until the free spins round ends.

A competitive spirit among online casinos makes them formulate new casino bonuses and other welcome offers to attract new players. But since the list of UK casinos is so long, we have shortlisted two gambling platforms where you can play Fury of Odin Megaways and other similar games with delicious rewards and privileges.

Luck Land invites new customers with a deposit bonus of up to £50 and 50 bonus spins on Starburst. The platform hosts more than 600 quality slots from top game providers such as NetEnt, Play’n Go, Yggdrasil, etc. Other amenities include live chat support, a mobile-friendly website and licences from the UK Gambling Commission and Malta Gaming Authority.

Slotzo welcomes new users with a 100% welcome bonus of up to £150, along with 50 extra spins. At Slotzo, you can enjoy online slots and live casino games from various software developers. The casino accepts several popular payment methods including PayPal, Trustly, Paysafecard, VISA, etc.

To get an instant action of Fury of Odin Megaways slot in an online casino, you can use PayPal as your preferred deposit method. PayPal’s e-wallet is one of the most reputed around the globe and is highly popular among UK players. PayPal facilitates instant transactions and also offers a fast withdrawal speed.

You can use this payment method in PayPal casinos to win exclusive bonuses, promotions, cashbacks, etc. Also, since you only have to enter your PayPal wallet address in any gambling platform, your bank account details remain totally confidential and thus safe from any potential online fraudulence.

Fury of Odin Megaways takes the Norse slot’s experience to new heights. The online slot has carefully sketched the features to make them look desirable. A below-average RTP and extremely high variance might put off some players but overall, the slot has more pros than cons.

A guaranteed win at one point of the game or another is surely a luring prospect for many players. Moreover, respins with guaranteed winning ways are another enticing aspect of the slot. While how much buzz bonus features create remains to be seen, playing Fury of Odin Megaways surely has its charms, especially when we compare it to other Norse slots. Naturally, it is advisable to first use the no-risk Odin Megaways demo version of the slot to see if this new megaways game appeals to you.