A Red Riding Hood-themed slot with dark undertones, medium variance and a 96.1% RTP. This game has 25 paylines and an innovative reel set up where a block of 3 reels x 4 rows moves from left to right during spins. These Wandering Reels come with massive symbols. There is also a pick me bonus round with multiplier prizes, and a Free Spins round with up to 1,000x potential in each spin. 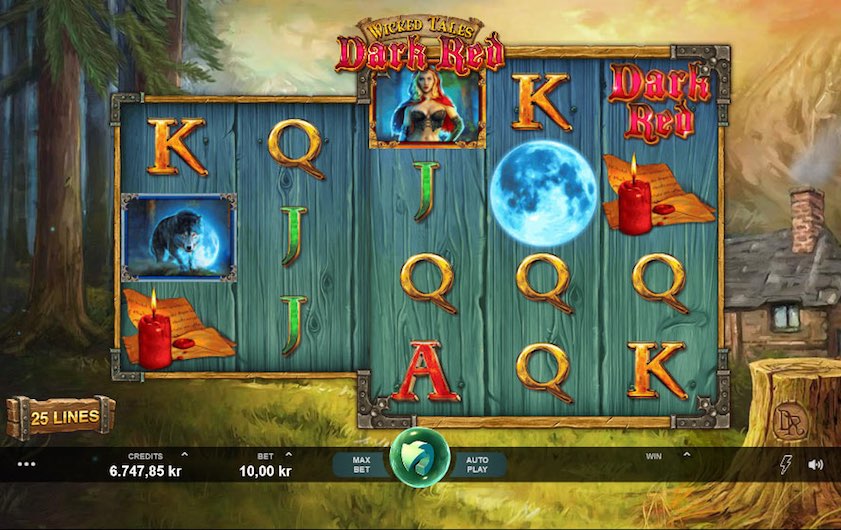 Where Can I Play Wicked Tales: Dark Red Slot?

Fans of NetEnt’s Fairy Tale series of slot games may like the look of this one. But be ready for something a bit darker – Dark Red features a grown-up version of Little Red Riding Hood taking on a fiersome wolf.

We also notice that the gameplay has strong similarities with the MG Halloween slot but with a slightly different maths model that pushes up the variance. It is possible in the bonus round to hit a 1,000x payout in one spin too.

The game has 5 reels and 25 paylines. Normal so far, but straight away you’ll also see that there is a block of reels that is 3×4, as well as another block that is 3×3. The bigger block is a ‘wanderer’ and can move from left to right and right to left to create a different reel configuration during the game. This makes things a little more interesting, particularly when it combines with giant 3×4 symbols.

The background to this game is a classic fairytale-style illustration of a dark forest, called Ravenmire, and a house pouring smoke from a chimney. Quiant, by slightly spooky.

The reels feature standard low value symbols of Jack, Queen, King and Ace, as well as candles and gold coins. The premium symbols are a pendant, a wolf, a man with a flaming torch, and the Riding Hood character too. She is the highest paying at 80x for five on a payline.

You can also pick up an 80x payout for landing 5 of the wilds (logos) which also substitute for all other symbols bar the scatter (full moon).

The wandering reels also contain massive symbol blocks that occupy 3 reels by 4 rows, making it easier to land a full screen of a symbol, including the highest paying ones, to create 1,000x win.

You need to land three Full Moon scatter symbols to trigger this bonus round in which you must spin the wheel. This will reveal either a win of a multiplier (up to 20x) which brings up a cash prize, or access to one of the features – Forest of Fortunes Pick Me round, or Free Spins.

In the Forest of Fortunes you must pick to win cash prizes. There are 10 in all, and after each pick your prize multiplier increases by 1x. However, if you reveal a ‘Stopper’ then the round ends. There are also immunities that can be collected to prevent the Stoppers from working.

Wicked Tales: Dark Edge is a great looking slot game with some interesting features. The wandering reels and big blocks are more fun to watch than your standard set up, but it’s the bonus rounds and in particular the free spins that are where the action hots up. There is good win potential in the free spins round as your odds improve as you get more identical high value symbols on the reels.

Just bear in mind that this is a medium-high variance number so it’s not that easy to trigger the bonuses in the first place!