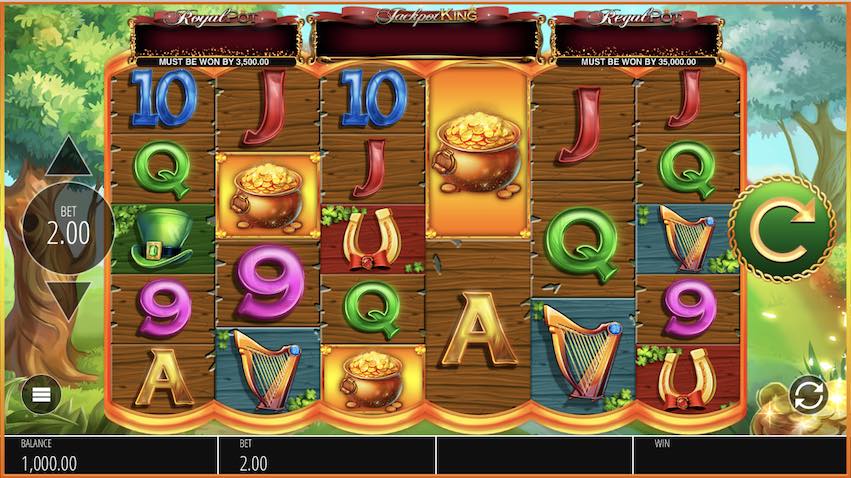 Where Can I Play Slots O Gold Megaways™ Slot?

Since signing the deal to bring the Megaways™ magic to their slots, Blueprint have wasted no time in producing both original titles like Buffalo Rising and Diamond Mine as well as hooking the engine up with classics like Genie Jackpots.

In this instance, a rather run-of-the-mill 2016 release called Slots O Gold gets the hyper-high-variance treatment with expanding reels that create 15,625 ways to win. Blueprint have dispensed with free spins and there are no multipliers in the game. However, we do get plenty of wilds, expanding wilds creating wild reels, and re-spins. And on top of that Slot O Gold Megaways™ is hooked up to the multi-million pound Jackpot King Progressive network.

This is a simpler, paired down version of Megaways™ but it still packs a fair punch and gives good potential at 10,000x.

Slots O Gold bears all the hallmarks of the classic Irish video slot. There is a pretty glade with knarly old trees, rainbows, horsehoes, pots of gold and of course … a grinning leprechaun in a green hat.

Look out as well for the Lucky Leprechaun symbol which is the wild. It substitutes for all others as well as expanding to create fully wild reels in the features.

The Rainbow Gold symbols is also important – when more than one lands then they transform into the same matching symbol to create winning lines.

The Leprechaun Wild doesn’t just substitute for other symbols. When he lands on either reels 2, 3, 4 or 5 then the Rainbow Re-Spins feature is triggered. Here, he expands to fill the entire reel, then become sticky whilst the rest of the reels spin once more.

The same process occurs if you get another wild on the middle reels during the re-spin. This can happen up to 4 times to give 4 re-spins and 4 fully wild reels on the final one.

This is where you have the best chance of hitting that 10,000x top payout.

To play the Jackpot King game you will need to land five Jackpot King Deluxe symbols on any spin. Then you spin a new reel set to start collecting crowns. You need 15 in total to progress to the Wheel King section of the game where three Progressives await. The top Jackpot King Progressive has an average win of well over £1,000,000.

Slots O Gold Megaways™ is a simpler slot than many of the others in the series because it has no bonus round, free spins or multipliers. However, that does not make it any less fun. The sticky wild reels and the multipler re-spins are exciting when you land 4 in a row and even in the base game with the full six expansive reels in play there are some tasty wins to be had. Still, a high variance game so approach with some care!