A high variance Irish drinking-themed pays both ways slot with expanding reels and up to 1,125 ways to win when the sidewinder rows are both active. Comes with lots of Wilds, Free Spins and a top payout of 2,720x! 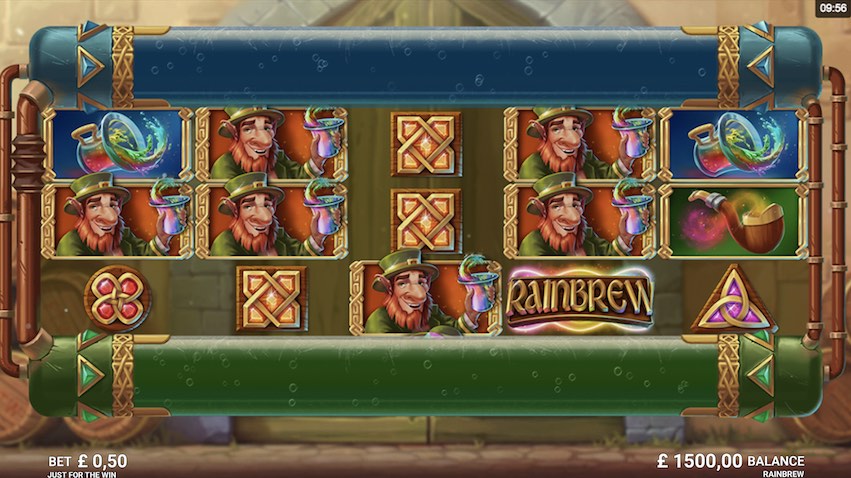 Where Can I Play Rainbrew Slot?

Just For The Win is one of Microgaming’s production partners, a Swedish-based studio who have been up and running since 2016 and have been responsible for a mixed bag of games that includes Deco Diamonds, Goldwyn’s Fairies and Temple of Tut.

Their latest release is Rainbrew, an Irish Leprechaun-themed slot with a drinking angle thrown in for good measure. It uses a new Sidewinder feature where extra rows are brought into the game to increase the ways to win to 1,125, and allow for bigger stacks of Wilds to land.

There is also a free spins round with up to 10 free spins available on the expanded reels set up.

This is not the most sophisticated game of all time, and its high variance means it’s going to be a tough nut to crack. But it comes with a top payout of 2,270x and an RTP of 96.02%. So maybe worth a punt.

The Rainbrew game runs on a reel set up of 5×3 initially in the base game, with 243 ways to win as this slot pays out from left to right and right to left. There are two ‘Sidewinder’ reels that are each 3×1, which when activated make the full reel set effectively 5,3,3,3,5, creating 1,125 ways to win.

The Sidewinders themselves are activated by landing special wilds on a spin.

There are five low value symbols in the game, each one a Celtic symbol of some sort. The premium value symbols are the pipe, the mug, the barrel and the two leprechaun characters. The male leprechaun pays out 8x for five in a row.

There are three different wild symbols in the game as well – standard wilds, blue wilds and green wilds, each responsible for activating one of the Sidewinders.

And there is also a Rainbrew Scatter symbols which activates the Free Spins round. 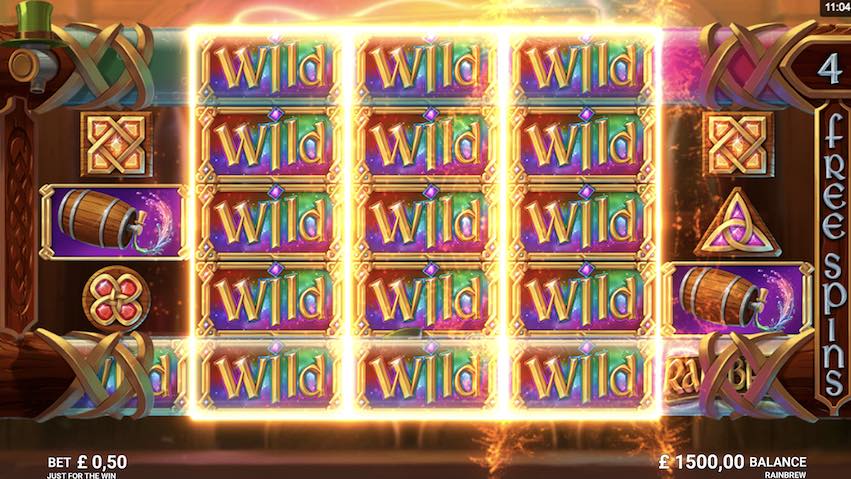 The features in the game are the Sidewinders and the free spins. Some of this may seem a bit confusing at first, and with all the different colors going on we recommend you don’t drink any Rainbrew before tackling this game for the first time!

And Standard Wilds only appear on the two Sidewinder Reels! So basically, you want to activate the 2 sidewinders and then try to land Wilds across the full reel set.

There is a kind of two stage process to trigger the free spins round. Firstly, you’ll need to land Rainbrew scatters on reels 2 and 4. This opens up the Sidewinders again, this time they spin to reveal more scatters.

You need to land three more scatters to get 6 free spins, or 4 to get 10 free spins. And during the round the reels open up to create 1,125 ways to win, with all wilds and scatters active.

During the Free Spins round it is possible to create Expanding Wilds when a wild stops on the same reel position on each Sidewinder – in this instance the rows between the two are completed with more wilds.

Finally, you can also score extra spins – one for any Rainbrew Scatter that lands on either Sidewinder during the Free Spins round.

This is a weird little game from Just For The Win. It sounds hard to understand but in reality after a few spins it will sink in pretty quick. For a high variance slot we’d like to see a bit more in the top payout – 2,720x is a bit low for our liking. Nonetheless the Sidewinder feature is quite cool and adds a fun dimension to the game.

Take it for a spin at any of the Microgaming Casinos in our UK Slot Site list.

More Slots From Just For The Win and Microgaming