A classic high variance, 4,096 ways to win video slot from Play n Go, featuring a roaring, red-eyed prehistoric monster, wild stacks that walk across the reels, a free spins round with 30 plays and unlimited re-triggers, plus Rex multipliers that can combine to deliver up to 243x! The game has potential to deliver up to 5,000x payouts. 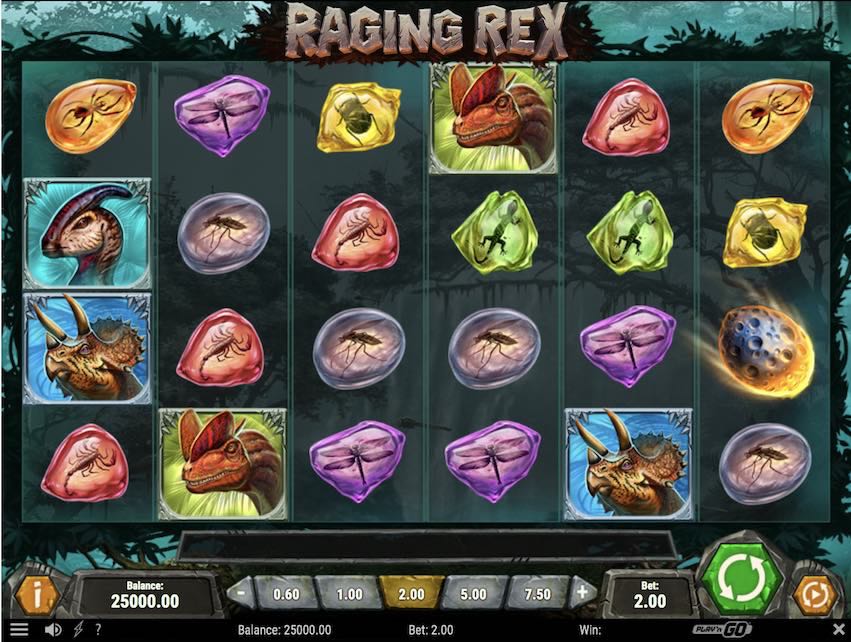 Where Can I Play Raging Rex Slot?

ALL ABOUT RAGING REX SLOT

The team at Play n Go are laying down a marker early in 2019 with this thrilling 4,096 ways to win slot that hits you where it counts with high variance and decent potential in a bonus round where stacked wilds combine with multipliers and free spin re-triggers to create classic slot thrills and spills.

If you’re not familiar with 4,096 ways to win slots then this could be a great place to start. This format, first introduced by WMS in 2014 with the Raging Rhino, has been copied many times over by studios like Thunderkick, with the brilliant Pink Elephants, and Playtech, with their version called Buffalo Blitz. These are always high variance games, typically involve a wild animal of some sort, and will frustrate you for long periods before delivering massive wins driven by multipliers and symbol stacks. Check out some of the best big win videos on You Tube to witness it for real.

Play n Go delivered some superb games in 2018 – House of Doom, Street Magic and Banana Rock to name a few – and with Raging Rex they appear show no signs of letting their high standards slip in 2019.

Raging Rex is set in a prehistoric forest and the Jurassic backdrop is superbly drawn. The reels are six wide by four rows deep. The low value symbols are amber-trapped fossils in silver, orange, yellow, red, purple and green. The premium symbols are various dinosaurs, including the highest paying Velociraptor, delivering 7.5x for five on a payline.

The T-Rex himself is a wild, substituting for all others bar the scatter and appearing in stacks on the reels.

There is also a meteor scatter symbol which is needed to trigger the all important free spins round.

The Rampage feature in Raging Rex comes into play when a full wild stack of T-Rex’s appears anywhere between reels 2 to 6.  The stack is sticky so stays on the reels as you benefit from consecutive re-spins. Before each spin the stack moves one reel to the left until it drops off the end. So, if you start with the stack on reel 6, then you have 6 re-spins with a sticky reel stack on each.

Land 3 or more meteor scatters and you will set up the free spins round as follows:

It is also possible to trigger more free spins (unlimited) during the bonus round as follows:

There are two modes in the free spins round for you to choose from, as follows:

Primal Rage: A Raging Rex wild stack will appear on one reel on EVERY spin.

Wild Hunt: Wild stacks are removed from the reels, but other instances of Rex wilds come with 2x and 3x multipliers. These can combine on winning lines to create multipliers of up to 243x.

Raging Rex is an excellent new high variance game from Play n Go with superb features and a great look and feel. If you like testing your nerve on games with good potential then this is a great place to kick off your spins in 2019. The stacked wilds keep things warm in the base game whilst the best bits are saved for the bonus round – we recommend choosing the Wild Hunt option if you get there – those multipliers can give you serious wins in combination. Good luck!