A fun and innovative slot with a clever Mystery Symbols feature and a free spins round unlocked by collecting keys in the base game. Awesome 8-bit arcade-style graphics and the backdrop of a San Fransisco Bay-type scene. Excellent gameplay and massive payout potential at 51,840x. 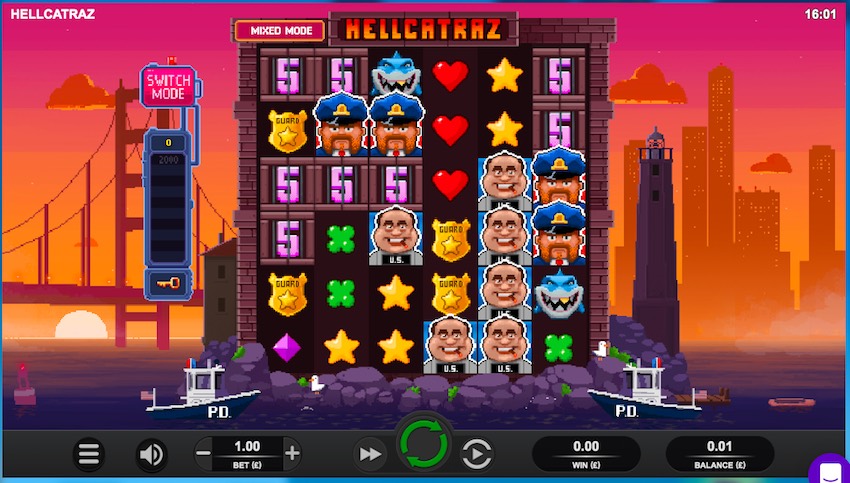 Where Can I Play Hellcatraz Slot?

Relax Gaming are an interesting slot studio right now – they are delivering some really innovative and sharp-looking games. Their high variance grid game, TNT Tumble, with its mix of ‘drilling wilds’, multipliers and free spins is an excellent play. Meanwhile they’ve also had a hand in Fantasma Gaming’s Heroes Hunt, delivered on their Silver Bulllet platform, with clever gamification added to give a much-needed injection of new ideas into the Megaways™ series. Next up for them is Hellcatraz, a game with a distinct style that those with a keen eye will immediately notice takes a leaf out of one of Thunderkick’s classic high variance game, Flame Busters. Relax’s slot is all in Retro Atari graphics, and draws its inspiration from the infamous prison block in San Fransisco Bay that was home to some of the United States’ most notorious criminals until it was turned into a museum for tourists. Hellcatraz meanwhile is notable for a choice of two variance settings and a whopping top payout of over 50,000x.

The style of Hellcatraz will be familiar to anyone who used to play 8-bit Atari games back in the 80s, or anyone who has since enjoyed one of the online simulations. The backdrop to the 6×6 reel grid is the mock-San Fransisco Golden Gate Bridge and the city skyine. The scene will switch from day to night as the game moves from base game to bonus round which is pretty cool.

Low value symbols on the reels are represented by the card suit icons – spades, clubs, diamonds and hearts. The premium symbols meanwhile are a shady looking crime boss, a prison officer, a prison guard, handcuffs, the guard’s badge and a shark (what you got if you tried to make a swim for it!).  The prison officer is the highest paying symbol of the lot at 2x for six on a payline. There is also a Wild (the letter W) which subs for all others to create winning lines.

This is a game with two volatility settings which you can choose from before spinning the reels. Both are high – Mixed Mode, and the Lockdown Mode. The latter is the higher variance of the two. Mixed Mode comes with an RTP of 96.46% whilst Lockdown Mode comes with a variance of 96.3%. The highest payout advertised in the game is a massive 51,840x. In short, this is a slot for high risk players only – it will come with some very frustrating sessions, but as you will see, it also can deliver some freakish payouts driven by some pretty stunning event triggers.

Bear all this in mind when choosing your stake. For anyone with a modest bankroll it makes sense to play at the lowest stake of 20p per spin though there are higher options.

Hellcatraz is using the familiar Cascading Wins format – after each win the icons making up the winning lines are removed from the reels to be replaced with new ones. If this creates another win, then the process repeats. And so on, until no more wins are created.

Mystery Symbols are common in slots, in particular in the Megaways™ games. Here there is a slight twist on the format. Each one has a counter that drops by 1 after each cascade. When the counter reaches zero then the symbols reveal themselves and can contribute to wins. The counters re-set when a cascade sequence ends.

There are also variations in the two modes here – in Lockdown Mode all Mystery symbols have the same value. In the Mixed Mode their values are independent of each other and may be different or the same.

Just as Fantasma’s Heroes Hunt added gamification to the slots experience, so too does Hellcatraz. Here it is all about collecting Keys. They are awarded at random when they appear on top of regular symbols, at which point, the Key Meter to the left of the reels will increase by between 1 and 10 keys. Once 2,000 keys have been collected the Super Free Spins round is unlocked.

In this round, with 5 spins, the Mystery Symbols are revealed on each spin, without any countdown. In addition there are Golden Mystery Symbols which add further free spins to your total. Both enhancements are increasing your odds of hitting a higher payout.

Hellcatraz is a stand-out, innovative and intriguing slot in an age of too many cloned games. Whilst Mystery Symbol features may be fairly incidental in some of the big Megaways™ games out right now, in this instance they are critical. They are woven into the Cascading Wins in the base game, and important for unlocking the bigger wins in the free spins round. So watch out for them and get a handle on how they work when you first start. After that it’s all about the Key Feature and unlocking those spins. If you like gamification then you’ll love this slot – it takes some time to build up 2,000 keys, but it’s worth the wait. The only other point to make here is that on either mode, you’re playing high variance spins, so keep this in mind and gamble responsibly.