Great Rhino Deluxe is the third in a series of African savannah slots from Pragmatic Play. It is a medium variance game with 20 fixed paylines and a top payout of 6,000x. Features include locked reels and re-spins, multipliers, free spins and Major and Mega Jackpots. 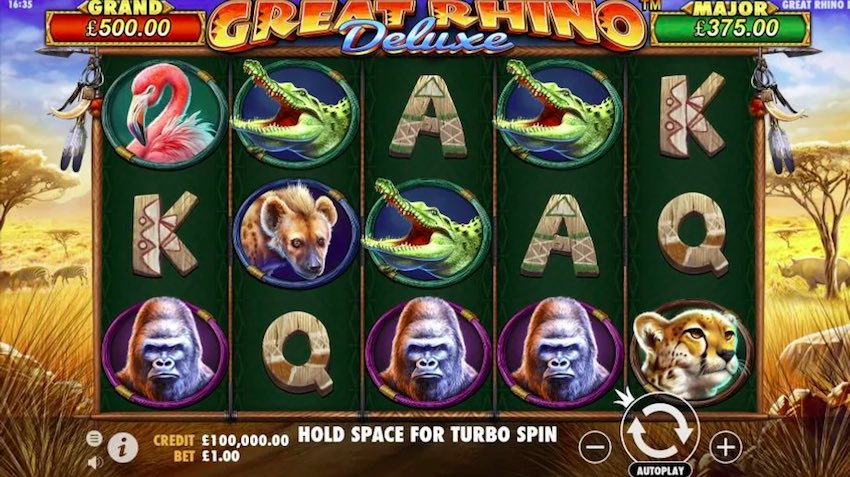 Where Can I Play Great Rhino Deluxe Slot?

ALL ABOUT GREAT RHINO DELUXE SLOT

We’re diving back into the African wilderness for another installment of Pragmatic’s clearly lucrative Great Rhino series. Their third venture with this fearsome beast follows hot on the heels of the Megaways™ game and it’s looking mighty familiar in terms of visuals and features. The strong, well-crafted illustrations are a great backdrop to a medium-high variance game where all the kicks come from landing stacks of Rhinos which lock for re-spins, or hitting the free spins round where multipliers can help push you on towards that top payout of a (modest) 6,000x. It’s a fun ride, and less intimidating than that other great rhino slot, Raging Rhino by WMS, so it’s likely to attract a larger fan base. Let’s dive in to find out more.

The 5×3 reel set looks no different to the other Great Rhino games, with the logo resplendent over the top. The background is a dusky savannah, lit up with orange and yellow sunlight and scattered with African wildlife including zebra and rhino. Look out as well for the striking African drum soundtrack that sets the mood as soon as you load up the game. The lower value symbols here are the cards, Queen through to Ace, whilst the premium symbols are the animals – hyenas, silver back gorillas, cheetahs and crocodiles.

The rhino himself is the biggest of all, paying out 20x for five on a payline. There is also a Wild, represented by a rhino head in a coin and valued at 25x for five on a line. He subs for all others except for the sunset scatter which is required to set up the bonus round.

It might look like it’s got high, high variance written all over it, but in fact, Great Rhino Deluxe is at the medium part of the scale, so don’t expect the roller-coaster ride of other high variance games from Pragmatic, like Book of Tut. Instead the play is fairly steady and the top payout just 6,000x. Still good, but not at the level of other games this year. The RTP is set at a standard 96.5% so no complaints there, and you can start spinning from just 20p per play.

It’s all about spins, spins and more spins! Here’s how Great Rhino Deluxe enhances the base game to drive up the wins …

The top paying Rhino symbol lands in stacks, and when two land on the same spin, the Super Re-Spins feature is triggered. Here, the two stacks are locked and three re-spins ensue. During the re-spins ONLY Rhinos (or empty spaces) land on the reels.  When a new Rhino lands it automatically adds another re-spin to the total. And … Rhinos now come with multipliers as well which means that when they appear in a win line your win value is enhanced.

At the end of the re-spins feature, if 14 Rhinos are visible then the Major Jackpot pays out at 375x. If ALL 15 spaces on the reels are filled with Rhinos, then the top payout of the 500x Mega Jackpot is triggered.

The sunset scatter symbol is the trigger for the free spins round. You’ll need to land three or more on reels 2, 3 and 4 to get 10 spins. During this modest bonus round, any Rhino that lands is collected. When the 10 spins are up, all the collected Rhinos are dropped back onto the reels in random position, potentially triggering a nice set of wins.

It’s a simple slot, and no great changes from the first two versions of Great Rhino, but it’s still a fun game. In a world filled with unmemorable slots, this one has a striking look and soundtrack that sticks with you. The features are very straight forward and the top payout isn’t an earth-shaker by any means but the re-spins are regular and tantalizing enough to keep you engaged throughout.  Top fun for summer 2020.