Gold Volcano is a medium-high variance grid slot with a super-cool volcanic theme. Rumble, Lava and Excavate features set up wins with wilds and scatters in the base game, before the Eruption feature gives free spins on an expanded 8×8 grid. Watch out for wild multipliers and top payouts of 10,000x. 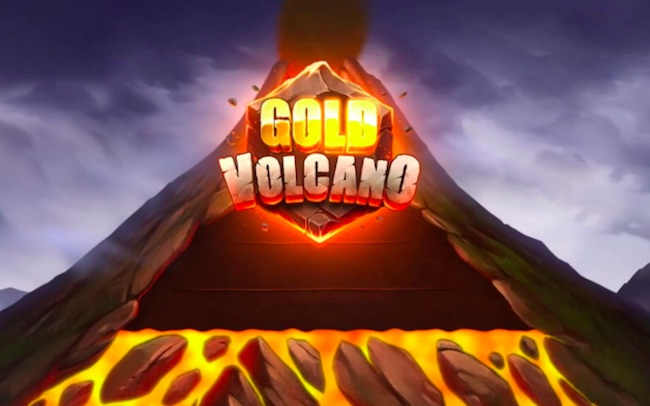 Where Can I Play Gold Volcano Slot?

ALL ABOUT GOLD VOLCANO SLOT

Grid-slot enthusiasts from Sweden, Play n Go, have produced something pretty unique in the latest release from their prolific schedule in 2020. After their journey into 80s rock mayhem with Twisted Sister, they’ve gone all geological on us and produced a game that weaves the natural features of Volcanos into the grid set up and gameplay of the slot. There are reels shaped like a Volcano, which expand in the free spins round, Pressure, Crystallisation and Eruption features that trigger epic events on screen, and random lava and rumble modifiers that pop up in the base game to enhance your wins.  The volcano is more than just a backdrop, it IS the game! It looks fantastic and with a 10,000x available top payout, Gold Volcano is definitely worth a spin.

The backdrop to the transparent grid of 8 reels is an enormous, dark and dangerous-looking volcano, under grey skies that turn a glowing orange in the bonus round. It’s a step above Play n Go’s usual graphical output and draws you into the action right away. The reels themselves are set to map the contours of a Volcano with a 3, 4, 5, 6, 6, 5, 4, 3 set up when the base game begins. The low value symbols on each reel are card suits spades, clubs, hearts and diamonds. The premiums are represented by gemstones in green, red, purple and gold.

The objective of the game is to form clusters of 5 or more identical symbols. The more symbols in your cluster, the greater the payout. Remember that the Gold gemstone far surpasses all others with a whopping 1,000x payout potential for 30 in cluster. There are also Wild symbols which sub for all others to form wins, and Glowing Rock scatters that upgrade low value symbols to Gold ones.

Gold Volcano doesn’t have quite the sky-high variance of other games in their catalogue. This one come in at the top of the medium variance range, but it’s still a tough game to win on, and at the same time capable of producing some impressive payout sequences in the bonus round which we will explain next. As we said earlier, the top payout is a decent 10,000x, and the RTP is set at standard Play n Go level of 96.2%. In short, this one will have a broad-enough appeal to reach beyond the high-risk fanatics and win Play n Go some fans from the casual slots gamblers too. Just choose your stake with care or you’ll burn your bankroll too quick.

A lot of thought has gone into matching the features to volcanic events and it makes for fun gameplay. Here is how they work:

If you’re lucky this volcano is going to run from Dormant to Eruption during your session. To start, the Dormant feature is made up of three random enhancements that come in the base game. They work as follows:

The Pressure feature is a variation on the standard cascade in grid slots. Here, winning symbols are removed after a tumble and new ones drop in to replace them. However, to increase chances of consecutive wins, extra wilds are put in to empty spaces before the drop. Wilds also come with multipliers which combine when more than one appears in a cluster.

The Crystallisation feature is when the scatters come into play. These Glowing Rocks cause low value symbols from the paytable to upgrade to Gold symbols when three or more land at once. The upgrade is held until the end of a win sequence, or until the end of the free spins if you are in the bonus round.

The climax of the whole sequence is the volcanic eruption, where Gold Volcano shows the full scale of its volatility. You’ll need six consecutive win cascades in one sequence to trigger the eruption. When this happens the grid expands to 8×8 and six free drops are awarded. If you get lucky enough to land a further six consecutive wins an extra drop is awarded. And remember, the Crystallisation feature stays active between wins to increase your payout potential too.

Gold Volcano is looking like it might be one of our favourite Play n Go releases for some time. Slot play can get very tedious when developers simply slap a new backdrop onto a tried and tested maths model and mechanic. But with this one clearly lots of thought has gone into how the features map onto the theme and it works really well. For our tastes we would have preferred the game to be at top level volatility to push some epic, epic wins in the Euruption round. But that’s not the way Play n Go chose to go, and fair play to them, the end result looks still looks stunning. We already think this one will be something we will be coming back to time and again in 2020. We hope you do too. Enjoy, and gamble responsibly.