Fruit Party 2 kept the original theme, but there are some slight visual improvements. Pragmatic play did not just improve the graphics, but also added some spice in the fruit salad.

The highly volatile slot with an above average RTP of 96.53%, offers exciting slot bonus features, wild multipliers, and big win opportunities. Read about it in our thorough Fruit Party 2 review. 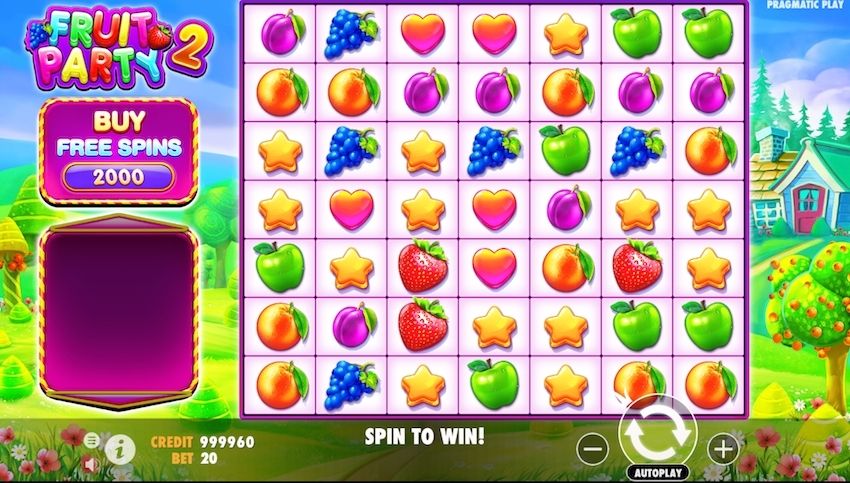 Where Can I Play Fruit Party 2 Slot?

What do organizers of a very successful party think? Man, we got to do this again. Pragmatic Play decided that one Fruit Party just wasn’t enough. We all know fruit is healthy, so there’s no such thing as too much fruit.

Keeping everything that was great, and adding more features makes this an improved version. You’ll find yourself in a familiar setting but with changes that level up the thrill.

Offering the opportunity of a maximum bet of £100, you get a win up to 5000x your bet, which means the maximum amount you can cash in from playing Fruit Party 2 is half a million pounds.

Besides Fruit Party 1, there are some other slots with similarities to Fruit Part 2, like Push Gaming’s Jammin Jars 2 and Cluster Slide from ELK studios.

The familiar jolly theme is still present in this sequel, enriched with different fruits placed on the game panel, alongside some trees and grass in the background, making it visually pleasant.

Fruit Party 2’s RTP is 96.53% which is quite high. It is also a pretty highly volatile slot, so solid wins are more than possible while enjoying the fruitiness of this slot game.

The max available win in the basic game is 150x, but the potential win amount gets a lot higher while playing the slot bonus features. The wild symbol multiplies your wins, and to justify its name, these multipliers can go pretty wild. The max you can get is 5000x your stake.

Even though the basic gameplay is interesting and engaging enough, allowing players to place bets anywhere from £0.20 – £100, the features are what we’re here for. A tumble feature occurs after every winning combination, making symbols disappear, plus a free spin feature, along with wild multipliers makes playing Fruit Party 2 pump you with adrenaline.

Fruit Party 2’s slot offers seven reels and seven rows, so you have forty-nine symbols on your screen. Wins are made when you get a cluster of any symbols with at least five in it, horizontally or vertically. After every win, a tumble feature is activated leading to the disappearance of winning symbols and replacing them with new ones.

Besides the standard symbols, there is a scatter symbol triggering the free spins slot bonus, and a wild symbol serving as a win multiplier.

After the forming of any winning cluster, the tumble feature is activated. This feature works in the way that the symbols in the winning cluster disappear and are replaced by new ones. The tumble keeps on going as long as there are winning combinations on the game panel.

The wild symbol can appear in some of the empty spaces replacing regular symbols, and helping you make new winning clusters. It comes with a win multiplier of x2, which doubles for every new cluster after every tumble and it can get to the maximum of x256 your bet. If you get more than one wild in the same cluster, their multiplied value is added up. Also, if one wild is a part of two clusters, the multiplier applies for both.

This feature is activated when you get at least three Golden Fruit scatter symbols. Landing three of them will get you ten free spins, four equals means twelve spins, five of the same render fifteen spins, six equals will award you with twenty spins, and with the max of seven Golden Fruits, you’ll get twenty-five free spins.

Fruit Party 2’s slot is a great sequel, giving you everything you enjoyed in the first version, but with a lot of improvements. The features make the slot very dynamic, with tumbles possibly giving you win after win, and wild multipliers making the numbers rise, alongside your win count.

It’s an exciting slot overall, providing an entertaining and adrenaline-filled experience. So make your bet, enjoy yourself, and at the end, harvest your prizes.