A simple, but enjoyable 243 ways-to-win, jungle cat-themed slot with medium variance and a wild reels feature that can set all five reels wild at once. Comes with up to 15 free spins in the bonus round and a top payout of 3,500x!

Where Can I Play Exotic Cats Slot?

ALL ABOUT EXOTIC CATS SLOT

By their own standards, 2018 has not been a vintage year for Microgaming slot releases. It’s been a mixed bag – here at The Slot Buzz we got a bit of a kick out of Fortunium and Playboy™ Gold, but can give Wild Scarabs a miss. Elsewhere, MG have relied on the development skills of 3rdparties like Just for the Win and Rabcat to deliver games in their name.

So on to their next release and Exotic Cats is a very simple affair, with just the one base game feature, the Wild Reels, which also appears in the bonus round. It is a 243 ways to win slot however, which at least gives it a little edge.

And as far as win potential goes, with up to 3,500x to play for in a spin, that’s not to be sniffed at

Exotic Cats is a 5 reel and 3 row game built on a 243 ways to win game engine. MG have not advertised the RTP prior to the games release but when we know more we will update this page of course. Exotic Cats can be played from 15p to £15 per spin and has a top payout of 3,500x.

Graphically, this is a fairly basic slot, with a dark jungle background to the reels and some nice feline illustrations for the symbols. 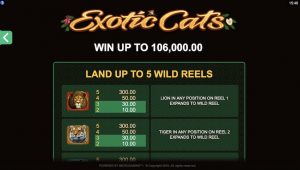 The lower value symbols on the reels are the card symbols, the spades, diamonds, hearts and clubs, as well as a female character and a pawprint symbol. The premium symbols are the cats themselves – the lion, tiger, panther, leopard and cougar.

The lion is the king of the reels and the highest paying symbol at 10x for five in a payline.

Look out as well for the Wild symbol – The Exotic Cats logo – which substitutes for all others except the scatter and pays out 14x for five in a payline.

The scatter symbol is the coins.

There are two features to look out for in Exotic Cats slot.

Vertical Wilds Feature – Each premium value symbol (exotic cat) is represented at the top of one reel. If that symbol lands on its own reel then it becomes a Wild Reel.

Reel 1 is Lion, Reel 2 is Tiger, Reel 3 is Panther, Reel 4 is Leopard and Reel 5 is Cougar. Should you land each cat on its corresponding reel then you turn the entire board WILD!

Just like in the base game, the Vertical Wilds also applies during the free spins round, giving you more chances to land fully wild reels, and maybe a fully wild screen!

And that’s your lot!

Exotic Cats will not go down as an all time great that’s for sure, but it’s not a bad little slot either. The Vertical Wilds feature comes up quite regular, and if you can hit the free spins round there is a chance of landing some nice wins. You might enjoy this one for a while but it does get a little monotonous and it will soon be time to move on.