Home » Slot Games » Ever After

Ever After Slot Review (NextGen)

NextGen jumped on board the fairy tales from the dark side slot band wagon to release this 243 ways to win medium variance game with surprisingly good potential. The Mirror Magnificent base game feature will land you expanding wilds, extra scatters and symbol upgrades, whilst the free spins round will grant you up to 30 free spins to kick off and potentially another 60 on top. 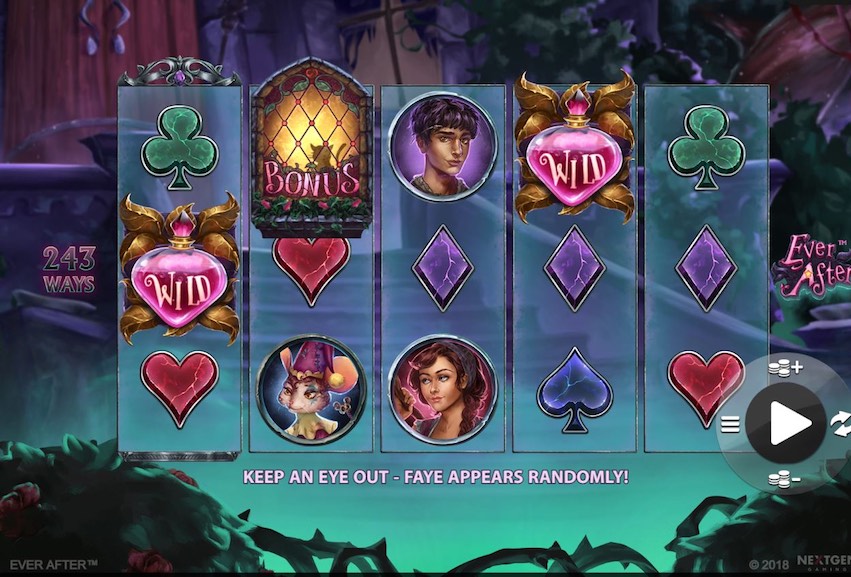 Where Can I Play Ever After Slot?

ALL EVER AFTER SLOT

After the enjoyable Wild 3, NextGen deliver this slot that is not a million miles away from NetEnt’s 2018 fairy tale release, Mirror Mirror. And like NetEnt’s game, this one uses a 243-way-to-win engine, although with a lower RTP but much higher win potential.

It seems that if you’re going to release a fairy tale slot these days you better make it have a dark twist – see MG’s Wicked Tales: Dark Red. And so it is with Ever After. The game is set in an enchanted forest called Darkwood, and our heroine is not a girl in a red hood, but instead a fairy named Faye!

But what will make this slot playable is not the mediocre graphics or the fairly standard features, but the free spins round where you can re-trigger for up to 60 plays and the nice potential of 4,860x in both the base game and free spins rounds.

Ever After Game Set Up

This is a standard 5 reel, 3 row slot with a 243-ways-to-win pay model. It comes with a medium variance and a 95.46% RTP. It can be played from 15p to £37.50 per spin and comes with a Mirror Magnificent feature that transforms symbols and lands expanding wilds, and a hot free spins round.

Ever After Game Symbols

The standard low value symbols in this game are the card suits – spades, clubs, diamonds and hearts. The premium symbols are a girl and a boy, an owl and a mouse. During the Mirror Magnificent round these symbols can transform into wilds equivalents. These are Prince Rakaq, Princess Adva, Dangerfield the Mouse and Bria Delmy.

Ever After Slot Features

There are just 2 key features in the Ever After slot game. They work as follows:

This feature in the base game triggers when a golden outline appears on the first reel. This is the signal for Faye to show up and ‘enchant’ this reel to give better win opportunities. The following outcomes are possible:

Enchanted Wild– a wild on the reel becomes enchanted and expands to create a wild reel.

Enchanted Scatters–  2 scatters appear to trigger the free spin round.

Enchanted Premiums– 1 or more premiums are upgraded to wilds.

Even in the base game here there is good potential on each spin, but NextGen have loaded things up even further in the free spins round. Here you can 6 spins for 3 scatters, 12 for 4 scatters and 30 for 5 scatters.

This is a MASSIVE bonus feature – you can land UNLIMITED re-triggers, PLUS on EVERY spin you’ll get an Enchantment from Faye!

Whilst on the surface this may not look like a classic, and to be fair it’s not one of NextGen’s best games, it does hide a tidy little potential for anyone lucky enough to hit a big run in the bonus round. Those re-triggers and the possibility of hitting a full screen of wilds with a 4,860x payout make this slot worth a spin or two.