A branded Megaways™ adventure from Blueprint Gaming, featuring the usual set of cascading wins, free spins and multipliers, but with the added thrill of the Deal of No Deal banker-gamble gameplay. Up to 117649 ways to win and a max payout of 10,000x. 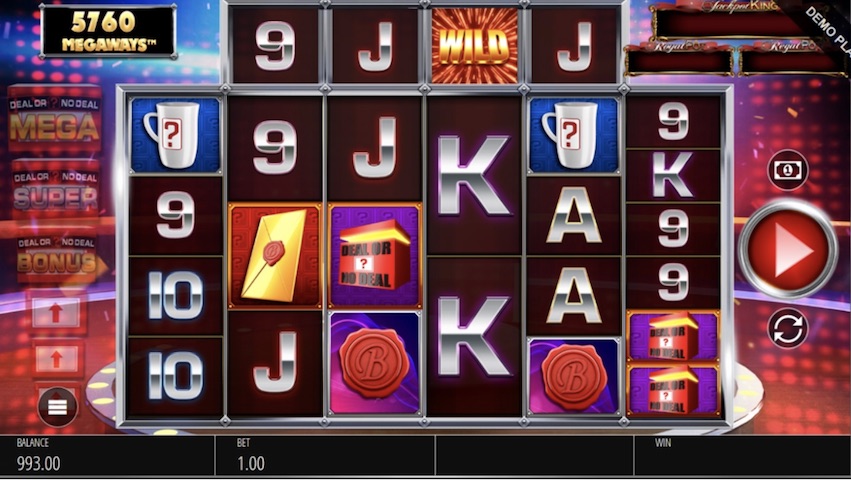 Where Can I Play Deal or No Deal Megaways™ Slot?

All About Deal or No Deal Megaways™ Slot

Blueprint’s take on the Deal or No Deal theme is not the only one you’ll find out there. The game might not feature the program’s hosts Noel Edmonds or Howie Mandel from the American version, but it does have all of its thrills and spills, including choosing boxes, banker’s phone calls and the choice of “take it or leave it”.

The machine runs on 6 reels which can contain up to 7 symbols each. This allows for Megaways to form up to a maximum of 117,649 possible winning combinations. As soon as you start spinning, you’ll notice how this configuration matches nicely with the theme and the part where you get to pick the boxes with prizes. Here we go – deal or no deal?

Originating in the Netherlands, the Deal or No Deal gameshow has acquired a massive global fan base over the years. The game consists of participants choosing briefcases from an initial set of 26. Each briefcase contains a different cash value. Over the course of the game, the contestant eliminates cases, until there is a call from the banker offering a cash amount in return for an exit from the game (i.e. cashing out your winnings). This Megaways™ game neatly builds features from the TV show into the slot play which happens on a reelset with the impressive TV studio set up behind whilst a pacey soundtrack sets the scene.

The pay symbols start at the low end with the card royals from 9 through to Ace. Other icons include mugs, banker’s seals, golden envelopes and the Deal or No Deal boxes that contestants select from during the show. The game’s logo is the highest paying symbol, delivering 50x the stake for a 6 of a kind combination. The Wild appears above the middle reels, in the four extra positions, substituting for any regular icon. Stakes start at 20p and go up to £10 per spin.

The question mark acts as a mystery symbol – this is a regular feature in Megaways™ slots. When more than one lands they turn to reveal identical symbols creating more chances of win lines.

Pay attention to the Bonus Trail displayed on the left of the reel grid. When 3 or more consecutive win cascades occur, the Deal or No Deal Bonus is activated and players enter into one of the three available bonus levels.

This part of the game follows the format of the TV show where you pick from boxes to get free spins and cash prizes. At various points a call from the banker will give you the opportunity to cash in or keep going. The level of prizes depends on how many consecutive wins triggered the round.

If you pick up free spins in the bonus round then these will come with standard Megaways™ add-on, unlimited progressive multipliers. The Mystery symbol is also active in the free spins round and additional spins can be earned

Five or more jackpot crowns set up this feature. The triggering symbols are locked in place and 3 respins ensue with only blanks and crowns on the reels. The aim is to collect sufficient crowns to enter the Jackpot King Bonus (you need to obtain 15) and win huge multipliers or a progressive jackpot.

With so many Megaways™ clone slots on the market it is a great to see a game release that does something a little bit different. Two of the best games of this kind in 2019 have been Monopoly and Deal or No Deal, and both manage to mix the Megaways™ gameplay with the features of the games that inspired them. Blueprint have pushed the boat out here to make the license fees worth it, and the result is an excellent Megaways™ slot that delivers an exciting gambling experience.