Deadwood is a high variance western slot from NoLimit City with 5 reels and 576 paylines in play at all times. Highlights include the xNugde Wild feature with wild symbol stacks, and a choice of two bonus rounds with free spins. The top payout potential of Deadwood is 13,950x.

Where Can I Play Deadwood Slot?

ALL ABOUT DEADWOOD SLOT

If you’ve been reading The Slot Buzz game reviews this year then you’ll know that we are big, big fans of Nolimit City games. They first made their name in 2019 with their high variance western, Tombstone, and in the early months of 2020 they have been setting the pace with some really creative and punchy slots that stand out from the crowd. Games like Punk Rocker and Barbarian Fury have some thrilling twists and turns and are built to please the high-risk fans amongst us. Nolimit even have their own trademark feature, the xNudge Wild. It’s not quite Megaways™ but its still a game mechanic that we’re getting to know and love.

So, what of Deadwood? Well, the good news is this game does not disappoint – on every level from the sparkling graphics, to the fun narrative with Gunslinger Spins and Shootout bonuses, to the now familiar xNudge Wilds mixed with win multipliers. And it’s all moving along at a quick pace and with a mean maths model but awesome potential, this is a slot that we’ll be talking about in years to come. Indeed, we’d go as far as to say it takes its place right next to another high variance classic set in the wild west, NetEnt’s Dead or Alive.

Think you’re ready? Then let’s load up and find out more.

This is an awesome reel set for sure. The graphics are spot on, with the dusty looking wild west town of Deadwood forming the backdrop. There are six reels in total. The end two have three rows of symbols, whilst the middle four have four each. The low value symbols are the cards, 10 through to Ace, whilst the premium symbols are a quality array of western symbols -gold bars, watches, whiskey bottles, shotguns and safes to keep the gold in. The highest value symbol is the gold bar at just 3.5x for five on a payline. But don’t worry because there are plenty of multipliers to push those wins up. And of course there is a Hunter Wild symbol that comes in stacks and triggers the xNudge feature too.

Look out as well for the Buffalo Skull scatters needed to trigger the free spins, and the Sheriff’s Badge that sets up a special Shoot Out feature explained below.

Deadwood is a slot for high risk fans with a variance set to the very top level. So if you prefer your gameplay to be more relaxed with regular payouts, then you might want to think twice before setting foot in this town. For those who do thought there are 576 paylines in play at all times across the five reels, and the RTP is set to a reasonable 96.03%. It is possible, though unlikely given the odds, to hit a top payout of 13,950x. That is a good potential, though not as high as some of the top Megaways™ games on release right now.

Deadwood has a similar set of features to its predecessor, Tombstone. They are as follows:


The Wild symbol is the Hunter and it lands in stacks on the middle three reels. With the xNudge feature, when the stack lands only partially in view it will nudge up or down until it fills the entire visible space of the reel. Each nudge increases a multiplier value by 1x. Once in place, any wins that are created including the wilds are subject to the multiplier. If more than one stack is in play and included in a win then the multipliers combine.

Look out for the Sheriff’s Badge that lands on reels 1 and 5. This will trigger the Shoot Out feature in which ALL low value symbols landing on the middle reels become wilds to boost your wins chances. 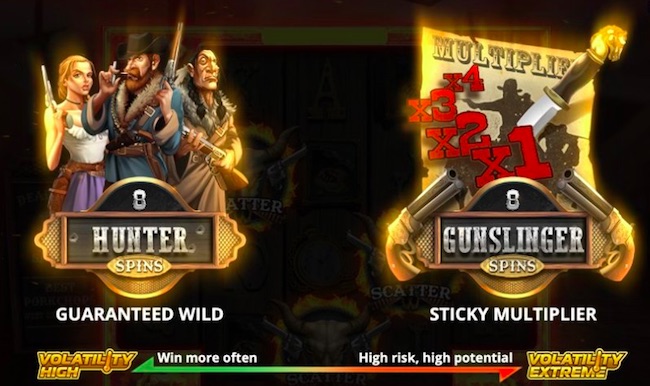 There are two free spins rounds in Deadwood, triggered by three or more Buffalo Scatters landing anywhere on the reels. In each instance you get 8 spins.

The Gunslingers are the highest variance part of the game. Here the Hunter Wild stacks come with an UNLIMITED wild multiplier – that means every time the xNudge is activated the multiplier increases by 1x. But this time, when the nudge sequence is completed and the next spin starts, the multiplier retains its value – it never re-sets during the round.

And … during Gunslinger you can add more spins by landing further Sheriff’s Badges on reels 1 and 5.

During the Hunter Spins which are at a lower variance (but still high) you are guaranteed to land a wild stack on EVERY spin. However, unlike the Gunslingers, in this instance the multiplier re-sets between spins.

Here you can choose between taking 10 Gunslinger Spins or 10 Hunter Spins. Whichever you choose, during the spins all low value symbols on the middle reels become wilds AND the Sheriff’s Badges remain locked in place for the duration.

No question, this is a bad ass slot game which is going to deliver some epic sessions and awesome wins. The artwork and the gameplay are a cut above most of the slots we’ve tried this year, and the free spins round options have the potential to drive some superb win sequences. The unlimited xNudge multiplier in the Gunslinger Spins looks like a stand out moment that we’ll look forward to seeing in action many times over. As always though, we write this review with a word of warning – these games are high risk, that means take care, tread carefully, and always gamble responsibly.