Cash Noire is a low variance, LA crime thriller slot staring Detective Tom Flint. The objective is to reveal clues by landing symbols in the Crime Zone until you unlock the free spins round. Then follow the City Chase map and find locations to boost your win multiplier up to 10x.  The top payout here is 5,000x. 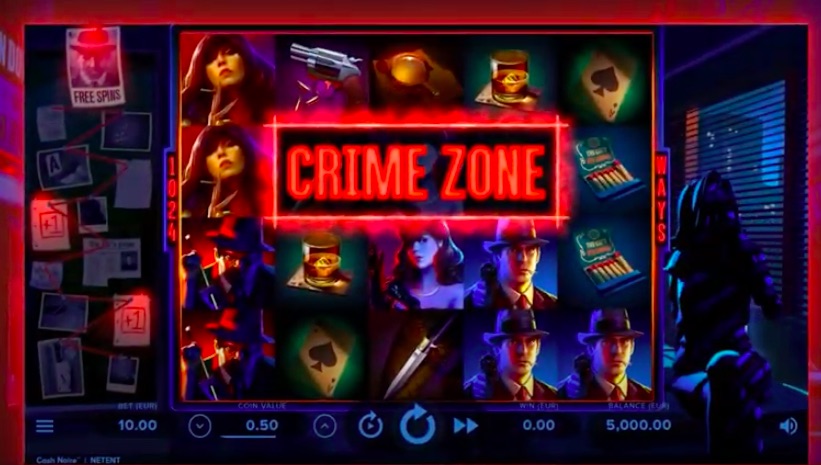 Where Can I Play Cash Noire Slot?

ALL ABOUT CASH NOIRE SLOT

NetEnt are delving into the seedy, neon-lit world of backstreet crimes, damsels and private investigators in their June 2020 release, Cash Noire. This is a game for the slot-playing masses – it’s low variance and low stakes fun with a slick and beautiful design, and packed with clever, punchy little features that keep you smiling throughout. The backdrop is reminiscent of an LA noire novel from Raymond Chandler or James Ellroy, and the intertwining of a crime story with standard features like Mystery Symbols and free spins is elegantly done. In truth at The Slot Buzz we’re used to reviewing the kind of high volatility mayhem produced by studios like BTG or Push Gaming, as that’s where are interest lies. So we had some reservations about this one. But to our delight we found NetEnt’s new slot to be pretty cool, and a game that might have a broad appeal to both casual slots players and more hard-core gamers alike. Read on to find out more.

Check out the screenshots and you’ll see that this is a classy game. The reelset is a typical 5×4, built against the backdrop of a PI’s dimly lit office, with a smoking Femme Fatale character sitting on a desk next to the window. Everything is shady, with intermittent neon lighting from the reels and the outside. It creates a great atmosphere for our story that stars the Detective Tom Flint whose role is to solve the crime and unleash the prize cache. To do so, he uses each of the features of the game which build towards hitting the bonus round.

Along the way are reel symbols ranging in value from low – playing cards, matches, a magnifying glass, daggers, revolvers and a whisky tumbler – and premium – the femme fatale, a snake, and our hero the Detective. There are also Mystery Symbols which transform when they land, but no scatters. Instead, the game has its own narrative in which successive events are needed to unlock the free spins. More on that in a moment.

Cash Noire is a low variance game. That means slower pace, more regular payout, but in smaller amounts. The top value prize is still an estimated 5,000x despite the low values of the symbols in the paytable, which is something to chase down though of course the odds are stacked very heavily against hitting that jackpot!  To score any win you’ll need to land three or more identical symbols on adjacent reels from left to right, regardless of position. This means 1,024 active paylines in play at all times. The RTP is set to a reasonable 96.06% and you can spin from as little as 20p per play.

NetEnt have worked hard here to build a storyline into the slot and its pretty engaging stuff. There are lots of features that trigger at various points, climaxing with the free spins round. It works as follows.

First up, this is a cascading wins slot like Gonzo’s Quest. That means, for each win, all winning symbols are removed from the reels and replaced with new ones. If more wins are created then the process repeats, and so on, until there are no more wins.

Ultimately your goal is to uncover all 13 items on the Clue List and so trigger the free spins round. To do this you will need to score wins including symbols that land in the Crime Zone. This is a selection of three or more spaces on the reels lit up in red before each spin.

The Bank Vault symbol is a mystery one. During both the base game and the bonus round it can perform a normal Mystery Symbol function in transforming into other random symbols from the paytable to create wins. However, if it lands in the Crime Zone then it will clone across each symbol space to create a block of identical symbols and enhancing your potential wins.

To get to the free spins round you’ll need to uncover all the clues. When you do, you will get onto the City Chase Map. Once again, the Crime Zone is important, as symbols that land inside it will activate locations on the map. When locations are activated, your win multiplier will increase by 1x from a starting value of 1x. It is possible by opening up all locations to score a maximum multiplier of 10x. When this happens the case closes and 3 extra spins are granted.

Cash Noire might not offer the high-risk thrills and spills that we know and love but it turns out be a pretty entertaining game. The narrative is one of the best we’ve seen a slot game for a while and the graphics and characters are really well put together. Casual slots fans will really enjoy it and there is enough of a hook for more hardened gamblers to get a kick out of too. So we recommend everyone to give this a try. And as always, if you do play, have fun and gamble responsibly.