Birds on a Wire Slot RTP and Review (Thunderkick)

A quirky but high volatility slot from 2014 that put Thunderkick on the map.  BOAW has a 96% RTP and features dropping symbols with 5x multipliers, and up to 34 Free Spins with 20x multipliers in the bonus round. Also the first slot with Inwinity Spins! 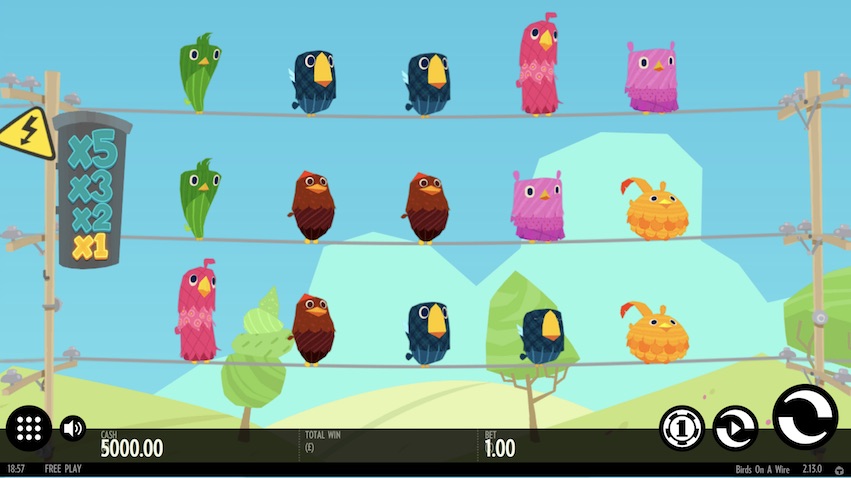 Where Can I Play Birds on a Wire Slot?

MORE ABOUT BIRDS ON A WIRE

Thunderkick did not hang around when they first launched, that’s for sure. After wowing us with their debut release, Esqueleto Explosivo in early 2014, dazzling games Magicious and Flux quickly followed, before later that year they dropped the Bird bomb!

Birds on a Wire is classic Thunderkick slot game – a unique and innovative design mixed with the best features – in this case, Dropping Reels with Multipliers.

It’s one game that made everyone sit up and take notice!

The Droppping Symbols feature has been used in one guise or another in a few of Thunderkick’s slots – that Mexican Day of the Dead one we’ve already mentioned for starters, but also in Frog Grog and Babushkas (if you think carefully!).

The designs and animations here are really cool and clever, but don’t let that distract you from the fact this is a high variance game that won’t let you take anything away without a fight!

Some Key Facts About Birds on a Wire Slot

Birds on a Wire Gameplay – How It Works

The key to understanding Birds on a Wire is the Dropping Symbols feature – you may have seen this in other Thunderkick games or famously in NetEnt’s Gonzo’s Quest where it is called Avalanche Reels.

This is how it works:

When a winning line is created, the winning birds are electrocuted by the wire under their feet and replaced by the birds above. The spaces they leave are filled in turn by birds that fly in from the left of the screen.

You can sit back and watch once a winning line comes in – the game will continue to play with ‘re-spins’ until there are no more winning lines.

With each ‘re-spin’ you get a multiplier increase up to 5x.

And that’s how the base game plays!

Birds on a Wire Free Spins and Multipliers Round

Of course, things get bigger and better if you can land three or more Bonus Symbols and trigger the Bonus Round which goes like this:

How To Win at Birds on a Wire

One of our favourite slot titles here at The Slot Buzz is no pushover. You’ll have to work at it to bring out a big win, so here’s a few pointers to help you.

Ready for some Dropping Symbols action then? You better be – for our money Birds on a Wire is one of Thunderkick’s best releases, up there with Flame Busters and Pink Elephants. Maybe not quite as intricate with the graphics and design, but still tons of fun.

If high volatility games are not your thing but you still fancy dipping into the Thunderkick game catalogue, why not try a low variance alternative like Flux or 1429 Unchartered Seas.