Betty, Boris and Boo is a five-reel, four-row spook-themed slot from Red Tiger Gaming with 30 fixed paylines. It’s slow paced in the base game but things pick up in the free spins round where three ghosts bring sticky wilds, free spins and multiplier modifiers into the game. This slot has an RTP of 95.69% and a top payout of 5,241x. 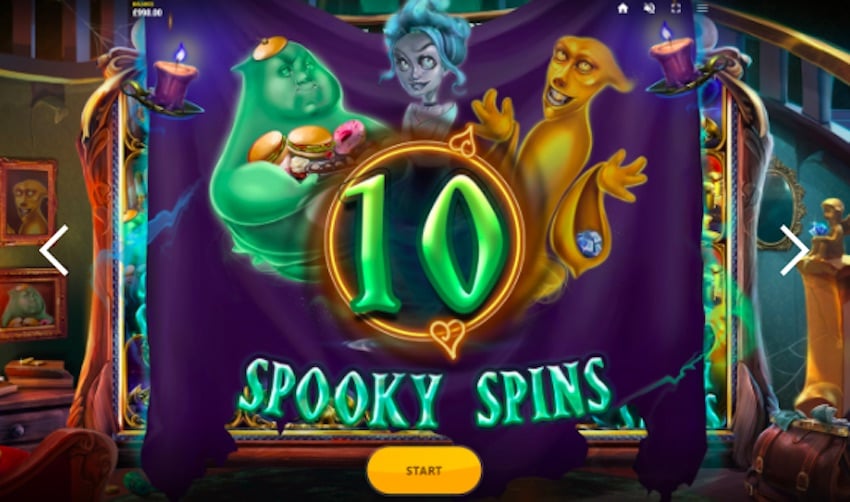 Where Can I Play Betty, Boris and Boo Slot?

Anyone who is familiar with the classic 80s film Ghostbusters will recognize some of the high variance capers going on in Betty, Boris and Boo. Not sure where Red Tiger got the inspiration for the names of these characters, but the visuals definitely wouldn’t look out of place in that movie. In particular we were just waiting for the green ‘Boris’ type character to ‘slime’ someone whilst munching on a huge cake of some kind. All the action takes place in a haunted house here with an old-fashioned feel. It’s not too creepy, more a comedy kind of poltergeist set up.

Red Tiger have been churning out the games at some pace recently and perhaps it could be argued that they have forsaken some quality for quantity – this particular slot doesn’t really get going until the main event, a free spins round where each of the three spooks brings their modifier to the table.

It’s not feature packed, but it is fun. Let’s find out more.

Spins start from 20p per play here and for those interested in the maths model, the variance is cranked up quite high. That means an uneven win distribution – don’t expect regular pays coming in the base game. Instead, all that is saved up for the bonus round where things kick on and wins of up to 5,000x + are possible.

To score a payout you’ll need to land 3 or more matching symbols on one of the 30 paylines from left to right. Meanwhile, the RTP of the game is 95.69%, which is somewhat below average.

Betty, Boris and Boo are the three main characters on the reels, but they do not act as regular symbols. Instead, you need to create winning combinations by using low-paying card suit icons, and any of the four premium symbols.

These premiums are represented by the candles, mirrors, books, and skulls. The latter is the highest-paying premium symbol, offering 10x bet for five of a kind, and also the only icon that pays even for two of a kind.

Also check out The Diamond which is used as a Wild that substitutes for all regular icons to form winlines, and the Scatter which is there to trigger Spooky Spins when three or more land on consecutive spins.

There are 4 features to be aware of in Betty, Boris and Boo. The key to winning big is to get combinations of the ghost features – on their own they are Ok, but if you can get them working together, well that’s where your chances of getting close to the top payout are.

This is the main attraction. Apart from getting 10 free spins, during this round three modifiers are active on the reels, brought to you by our three hosts. Each of the three ghosts has one modifier that is applied on a spin and every free spin comes with one randomly chosen modifier.

Betty’s trick is Sticky Wilds – when she appears so regular symbols are transformed into wilds which lock in place for the rest of the round.

As for Boris, judging by his name, he came to this haunted house somewhere from Russia, though he also bears more than a passing resemblance to the greedy Ghostbuster spook.

Just like Betty, he appears at random during the free spins. When this happens and he occupies a symbol, then that symbol starts to expand. Boris’ symbols can expand to 2×2, 3×3 or 4×4, so creating enhanced opportunities to score wins. Clearly, the higher value the expanding symbol, the better the wins might be.

Betty, Boris and Boo is a moderately good slot but in the modern age of slot gaming it doesn’t really pack a big enough punch or offer anything different enough in the features to mean it will have longevity. At a time when new studios like Relax are coming up with inventive gameplay like Multiplier Odyessey, everyone needs to up their game to compete. And we’re just not sure that we see enough of that here.

Having said that, if you can unlock the bonus round this ghost-themed slot does offer some enticing win opportunities, mainly driven by the combos of sticky wilds and multipliers, or colossal symbols mixed with multipliers.  So, if you decide to take these guys for a spin, that should be your gameplan! Good luck!