Artemis vs Medusa is a high variance epic battle slot with 1,024 paylines active on every spin. It comes with Bounty Coins and Bounty payouts associated with the main icons on the reels, which payout when they land concurrently with Artemis symbols. The free spins round offers unlimited plays with superb animations and battle scenes plus more bounties on offer. 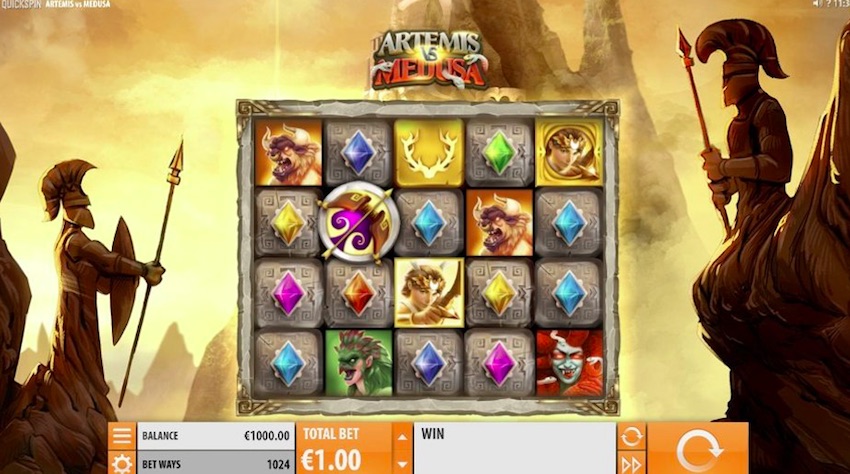 Where Can I Play Artemis vs Medusa Slot?

ALL ABOUT ARTEMIS VS MEDUSA SLOT

In slots, as in movies, when you run out of super-heroes or historical icons to portray, why not just set them against each other in epic battle? For Batman vs Superman, or Alien vs Predator, now read Artemis vs Medusa! Medusa has seen plenty of action on the reels over the years, thanks to her diabolical reputation and infamy that lends itself to great artwork and tense slots play. Artemis may be a less well-known character from Greek mythology, but she’s equally equipped for the mighty war that rages on the reels in this game. But for those who don’t know, a quick recap: Medusa was the snake-haired woman who could turn a man to stone with one look, whilst Armetis was the daughter of Zeus and had a number of roles, including goddess of the hunt and the Moon (an all-rounder by the sound of things). One of our favourite Swedish studios, Quickspin, have brought the two together in an interesting way with a 1,024 payline game that creates wins out of fights between the two characters trigged by combinations of symbols. There are also some cool gamification features that keep the action engaging in what is a pretty high volatile game.

As with all Quickspin slots, the graphics and animations in Artemis vs Medusa are of a very high quality. The game takes place on a 5 reel by 4 row set which sits against the backdrop of rocky mountains and a skyline that turns to purple starry night in the fight sequences. There are 1,024 paylines in play at all times in the game. Low value symbols are represented by the diamonds in blue, purple, yellow and green. The higher value symbols are made up of characters from ancient history, including minotaurs and medusa herself. The highest value symbol or all is the Artemis icon, which is a 25x for five on a payline.

Look out as well for the Wild which is the Golden Antler. This one will sub in for all other symbols to create winning lines of symbols when it appears on the reels.

First thing to note here is that Artemis vs Medusa is a highly volatile slot. Something that Quickspin fans will have become more used to in recent years. That means it is not going to pay out frequently and you may be waiting a while before you see any wins coming through. It does have the capacity to pay out over 5,000x on a spin, but beware that these kind of wins are extremely rare. Choose your stake accordingly so you don’t burn through your bankroll too quick. You can play from just 20p per spin. The RTP of this slot is 96.17% which makes is pretty decent and in line with most slots in the UK right now.

There are several features to look out for here, the most important being the free spins battle round.

When a symbol lands on the reels that is not a generic gemstone – i.e. one of the minotaurs, medusas and other icons – they will sometimes have a Bounty Coin value with them too. When this occurs and at the same time an Artemis lands on reel 5, so the coins value is added up and a Bounty awarded. To find out what your Bounty is each time, check the paytable which shows the value of each symbol: Harpies 2x, Gryphons 4x,  Minotaurs 8x, Medusa 15x.

The Free Spins round is, as tradition dictates, triggered by landing 3 or more scatters on one spin. Here, new animations occur above the reel set. Artemis with her bow and arrow appears on the left. The monsters appear on the right. Landing Medusa, Harpies and the other icons increases their meter score during the bonus round and brings them closer into Armetis. Landing Armetis icons removes symbols from the meter and adds to your bounty from the round. Once all monsters are removed OR the meter hits 15, the round comes to an end and the player gets their bounty.

Artemis vs Medusa is a unique game and one the like of which we haven’t really reviewed before. Which is saying something! The gameplay is a bit weird at first as you enter the free spins round, but once you get used to it, it’s kind of fun. The bounty from the special icons can add up pretty quick if you get on a roll, and with unlimited free spins it seems there is some potential in this game. However, remember that as a high variance slot it’s not going to be kind to you in a hurry, so take care and gamble responsibly if you decide to spin.