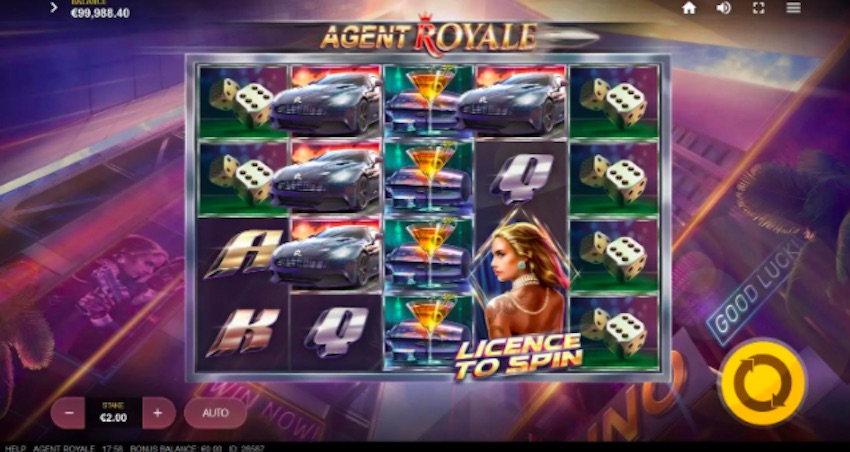 Where Can I Play Agent Royale Slot?

With a 007 and Jason Bourne style super-hero, Agent Royale sees Red Tiger Gaming dipping into the world of espionage and fast-paced spy action. The narrative centers around the spy himself, with a concoction of casinos, gambling, weapons and bombs appearing on the reels, and, of course, an attractive young lady to add more spice to the mix.

The reels are set at the entrance of a casino, while the poster of our hero and the mysterious lady is placed on the bottom left side of the screen. Needless to say that the soundtrack fits the theme perfectly and thanks to Red Tiger’s usually high standard of artwork the atmosphere is tense, dramatic and classy.

Firstly, this is a pretty high variance slot. It’s not on the level of some of the biggest Megaways™ games or Nolimit City’s latest games, but it’s still going to prove a frustrating prospect and not a slot for those who like wins to be regular. There are 40 active paylines in play at all times and the top payout is advertised as 1,760x. Remember, getting even close to this value will be a huge ask so don’t expect many wins over the 500x mark. The RTP, meanwhile, Is a slightly underwhelming 95.77%.

Red Tiger’s design team have done a great job of creating a slick reel set and super cool icons. The low value ones are represented by the cards, 10 through to Ace, whilst the premiums are shown as a fast car, a cocktail, dice, and a bomb. The latter is the best value at 160x for the maximum combo.

Agent Royale is the top-paying symbol of the game, offering 200x for five of a kind. He also acts as a wild and substitutes for all regular symbols and has an ability to defuse bombs and turn them into locked and sticky Wilds, both in the base game and during the Free Spins feature.

And finally, the mysterious attractive lady is the Licence to Spin Scatter that triggers free spins.

The features here are relatively limited, with all the action centered on the free spins, wilds and sticky wilds. Our Agent super-hero is key to unlocking all the best stuff. Here is how it all works.

Every time you land Agent Royale Wild and the bomb symbol on the same spin, the Locked Wild feature is triggered. Now, if Agent Royale manages to defuse the bomb, it will be turned into a sticky Wild that will remain on the reels for the following spin. If the same thing happens on the subsequent spin too, then the Wild remains on the reels once more. The feature ends when there are no more new defused bombs left in view.

To trigger the Free Spins feature, you need three Licence to Spin Scatters on the reels at the same time. Players will get 8 free spins with a locked Agent Royale Wild on the central reel which stands at two spaces high.

The Locked Wilds feature is also active during free spins, so our hero continues defusing bombs when they land on the reels. Not every single one of them will be defused, but the defused ones will remain in their positions until the feature ends, helping to boost win potential in the game.

Of all the recent releases by Red Tiger Gaming, Agent Royal is quite average. This is a solid slot with a decent high volatility but the lack of variation in the gameplay means things can become quite monotonous. Fortunately the bomb diffusion happens regularly enough to keep you engaged and the win sequences can kick on nicely in the free spins round as wilds remain sticky throughout. Not a bad take on the spy-slot genre then, but we would like to have seen more features and a higher top payout for this one to get a higher rating.