A very simple 243-ways to win, low-variance Egyptian-themed slot with extra wilds and guaranteed wins in the base game, and a free spins feature with extra stashed wilds in the bonus round. Top win of 1,733x. 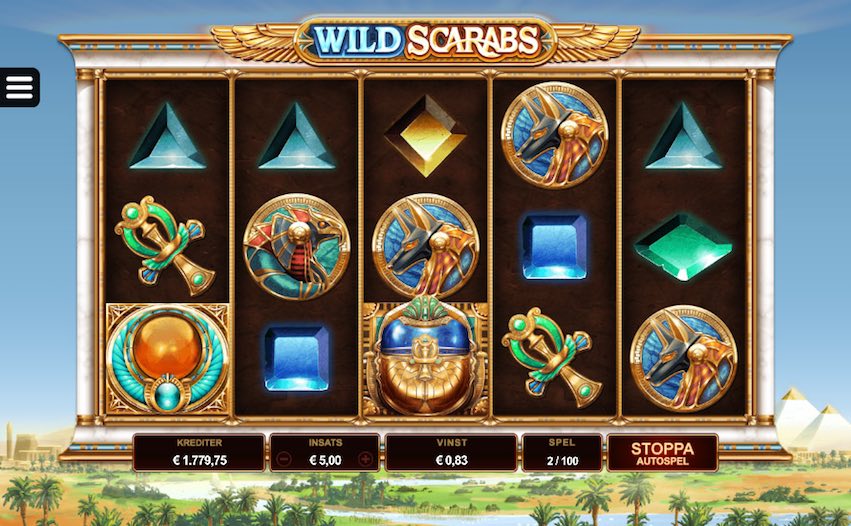 Where Can I Play Wild Scarabs Slot?

ALL ABOUT WILD SCARAB SLOT

Egyptian-themed slots are ten a penny in online casinos – from the good (like Book of Dead) to the bad and the ugly – we’ve seen them all. So it pays to be original – check out Yggdrail’s upcoming release, Tut’s Twister, for how to stick an interesting twist (!) on an old theme!

With Wild Scarab Microgaming aren’t re-writing the rule book sadly, but nonetheless this isn’t a bad little slot if you like low variance. You can while away a bit of spare time churning through some cash, and who knows, you might hit it lucky with the top 1,733x payout.

The base game has a bonus features with plenty of wild action, but the chance of bigger wins is really saved for the free spins round where there are plenty more wilds stashed to drive the payouts.

In the base game if you land a non-winning spin combined with a wild landing anywhere on the middle reel, then 4 extra wilds will be placed randomly across the reels.

To trigger the free spins feature you must land three or more of the high-paying scatter symbols anywhere on the reels. When you do you are credited a cache of 10 free spins. During this bonus round, if you land a spin with wilds in it without a winning line then your wilds are stashed.

Then, once you have collected three stashed wilds they are automatically thrown back out onto the reels to create a GUARANTEED winning line.

More free spins are then added to your cache and you keep playing until they are all used up.

This is not a game for the big money thrill seekers out there. It’s a pleasant enough slot, and very reminiscent of another Microgaming title, Dragonz. The graphics are fine, but it’s light on features. There is little risk here – it’s a low variance game – but good enough to play your bonus money through and can deliver a few decent spins in the free spins round.