A very straight forward fruity-style slot machine with 96.25% RTP, low variance and a 5,000x payout potential. No frills here, with just one free spins feature with extra wilds on a 5 reel, 10 payline game set up. 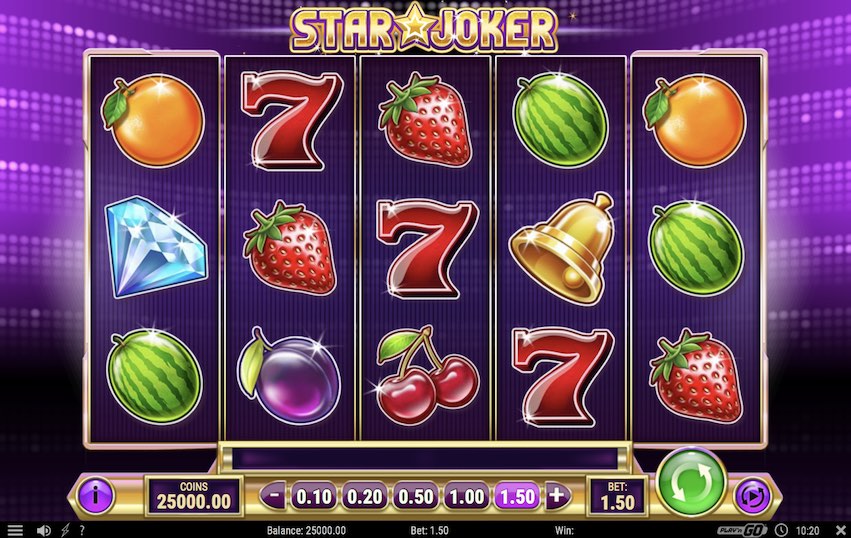 Where Can I Play Star Joker Slot?

ALL ABOUT STAR JOKER SLOT

It’s been a good year for Play n Go with some memorable releases from this popular slot studio. We’ve seen some really good high variance games in the form of Street Magic and House of Doom, and more recently, the funky-monkey thriller, Banana Rock.

With Star Joker it looks like this team are ending the year with something much simpler – a low variance, back to basics fruity slot with Jokers and Wilds as the stars of the show. This slot might look simple, but don’t let that fool you. For a low variance game it still packs a punch with a loaded bonus round where up to 5,000x can be won as additional wilds are brought onto the reels.

The only drawback here is that before you reach that stage the base game itself is pretty tame and the payout much more modest. To be fair, that is what you get in all low variance games like Star Joker.

In this game there are 5 reels and 3 rows set against a glittery purple disco backdrop, and 10 fixed paylines. It’s slick and glitzy and overall, the scene has an old-skool fruit machine vibe to it, using the traditional symbols including cherries, melons, oranges and strawberries, as well as bells, diamonds and 7s, a flashing star wild and a Joker.

So, with all the potential locked away in that free spins round, here’s what you need to do:

Landing scatters, as ever, triggers this feature. You need three scatter jokers to land on reels 1, 3 and 5 to get 10 free spins.

It is possible to unlock a further 10 free spins, taking your total to 20, by landing three or more further scatters during your bonus round.

The odds of landing a bigger prize here are more favorable because the wild comes into play AND the scatter becomes a wild too. On a single spin this means you can land a 500x line, and if ALL lines are wild, a 5,000x top payout.

When it comes to slot games it’s horses for courses – some like crazy high variance games with lots of spins, wilds, multipliers and mystery symbols, whilst others like low variance plodding games. Whether or not you will enjoy Star Joker depends on your tastes – this game has glitz and glamour and the high production values you would expect from a Play n Go game, but it’s simple, and it doesn’t really get going until the free spins kick in. That said, it has potential and if that’s what you’re after, it does the job!