Home » Slot Games » Rich Wilde and the Shield of Athena

Rich Wilde and the Shield of Athena

Rich Wilde and the Shield of Athena is a classic high variance slot from Play n Go. It is based on the myth of Medusa and includes a high-paying Shield of Athena symbol. Features are Medusa Re-Spins with fixed wild symbols, and a Medusa Free Spins round with locked wilds and re-triggers. Top payout is 10,000x. 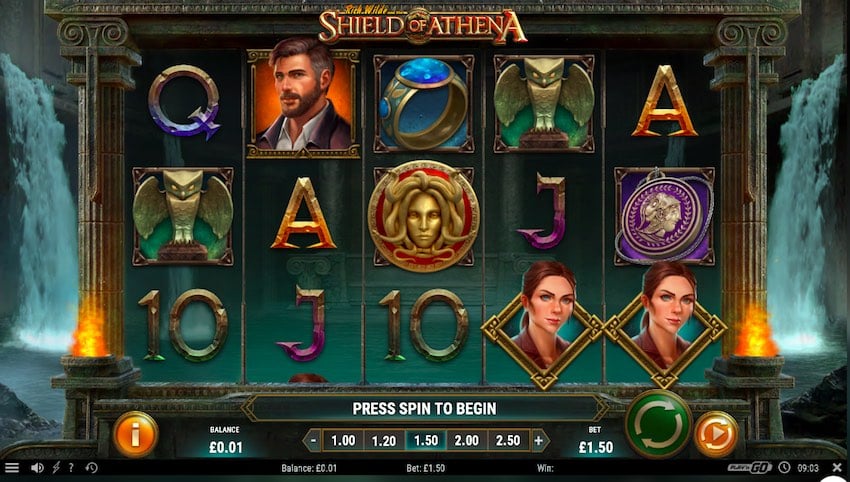 Where Can I Play Rich Wilde and the Shield of Athena Slot?

ALL ABOUT SHIELD OF ATHENA SLOT

Play n Go’s Rich Wilde franchise has been a big success from the early days of the infamous Book of Dead, a game which you can now play with free spins at Casino Planet, through various heroic exploits in space and time to this, his fifth outing on the reels and a face-off with an infamous figure from Greek history: the Medusa. This is a woman with snake-hair and a look that could turn a man to stone. The story goes that it was Perseus, using the Shield of Athena, who defeated the Medusa by turning her look back on herself thorough the reflection on the Shield of Athena. The story makes for a good backdrop to what is inevitably a high variance outing from Play n Go. Wilde is joined by his daughter, Cat, and the action is stripped back to the bear basics of high-risk slot play – wilds, re-spins and free spins. This is a slot that will appeal only to the hardened players out there – it has an enticing top payout of 10,000x but its high volatility means that payouts will be infrequent, but high value when they do drop.

The background to the 5×3 reel set is a typical Ancient Greek scene – large columns overlook the reels and fountains of water pour down either side. The gameplay is simple – 10 fixed paylines active at all times and payouts triggered by landing three or more identical symbols from left to right on any of those lines. The low value symbols are the cards 10 through to Ace, whilst the high value ones are represented by various icons from the myths of Ancient Greece, including an Owl, a Pendant, a Ring, and the Helm of Athena and the Shield of Athena. The last in that list is the highest in value at a whopping 500x for 5 on a payline.

Look out as well for Rich Wilde himself who represents the wild symbol which subs for all others and is worth a mind-boggling 1,000x for five on a line. His daughter, Cat Wilde, represents the scatter which is needed to trigger the free spins round.

Like all others in the Rich Wilde series, Shield of Athena is a high variance slot – that means tough gameplay that will require a lot of patience to unlock the riches that come in the bonus round when things fall your way. The win sequences can be pretty satisfying in games like this though – when the Wild Shield symbols lock and re-spins and free spins are in full flight the payout can notch right up to that 10,000x max, but the odds are very long, so don’t expect it to happen too often, if at all! The other stat to look out for is the RTP – here set at a decent 96.25%.

Simple, high volatility gameplay is what’s on offer in The Shield of Athena. The features are stripped back to the basic ones you know and love as follows:

Medusa Re-Spins – Any time the Shield of Athena lands on the reels in the base and bonus games then it transforms into a wild and locks for a re-spin. Any winning symbols that landed on the triggering spin are also held. This process repeats as long as more wins or Shields land.

Medusa’s Gaze Free Spins – When three or more of the Cat Wilde symbols land on the reels on one spin then the Free Spins are triggered. 10, 12 or 15 are triggered by landing 3, 4 or 5 scatters. During the free spins it is also possible to trigger Medusa Re-Spins AND re-trigger the bonus round itself! So plenty of opportunities to drive extra play and boost the payouts with locked high value symbols.

Rich Wilde and the Shield of Athena is another excellent sequel in one a very popular slots franchise. Play n Go haven’t sought to do anything too clever here, and why would they? This is a game built for high risk slots fans who know what they like. There are no crazy extra features and your eyes should be fixed firmly on those reels looking for the Shields and the two Wilde characters to land. That’s where the good payouts come, and the classic combo of locked wilds and re-spins always delivers great thrills. So have fun, and always gamble responsibly.