Bounty Belles is a high variance, five-reel video slot with 243 paylines from iSoftBet. It has a Wild West theme fronted by three outlaw cowgirls and is set in a mid-western desert. Base game reel action is enhanced by Wild Bounty expanding reels creating up to 1,125 paylines, Free Spins and Deadman’s Draw with a multiplier-based card game. With an RTP of 95.99%, Bounty Belles offers a maximum payout of 10,877x bet. 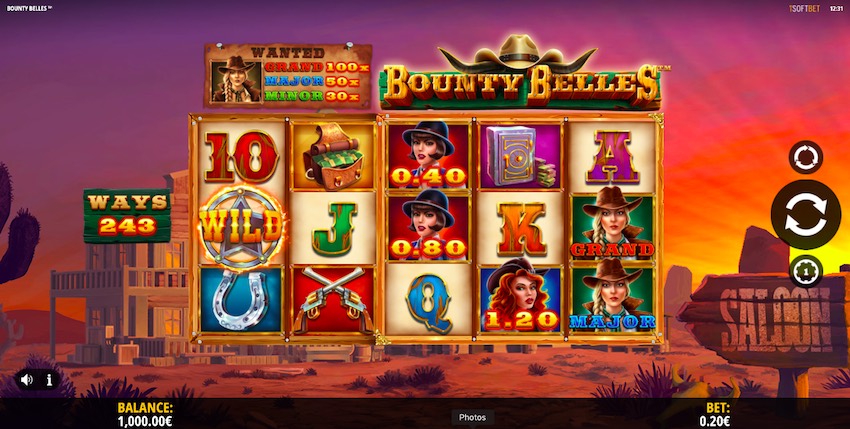 Where Can I Play Bounty Belles Slot?

Westerns are a great setting for high variance slots and have been the inspiration for classics like Dead or Alive from NetEnt, and more recently, Deadwood by Nolimit City. In iSoftBet’s caper the traditional steely-eyed cowboys are transformed into sultry cowgirls and the  Spaghetti Western surroundings, accompanied by a matching soundtrack, will invoke the mood of a Sergio Leone movie.

With the sun rising behind the tall rocky mountains, and the dusty saloon in the background, you know the things could turn from quiet and serene to epic and crazy at the spin of a reel. The highlights of the game are the expanding reels feature and the three JPs – minor, major and grand.

So, we are in high variance territory here, and as such you can expect payouts to be unevenly distributed. Even so, for those who are prepared to wait, Bounty Belles can produce some seriously good wins, up to 10,877x stake per single spin in fact. That is pretty competitive in today’s market.

The RTP is 95.99% which is just shy of the average return to player for Canadian slots at the moment. Betting starts at $0.20 per spin.

Low value symbols are represented by simple playing cards, done in Wild West style. As for the premium icons, you will see silver horseshoes, saddlebags packed with money, safes, and pistols. The guns pay out the most, offering 10x bet for five of a kind.

There are three features to look out for here, including the in-vogue expanding reels. Look out as well for three multiplier jackpots, the free spins round, and a win multiplier up to 10x.

Apart from substituting for all regular symbols, the sheriff’s badge Wild in Bounty Belles is in charge of triggering the Wild Bounty Mode feature. Land Wilds on reels 1 and 2 and the feature is triggered. The last three reels on the grid can now expand by one or two rows. If they are fully expanded, the paylines increase to up to 1,125.

As well as standard payline wins in this mode you can also pocket instant wins delivered by the three belles that land only on reels 3, 4, and 5 (2x to 8x prizes).

The Deadman’s Draw feature can be randomly triggered at any time.

Bounty Belles is a tasty new slot to add to the long list of high variance westerns out there. Its leading ladies make a nice change from the classic grizzled cowboy look, and the artwork for the backdrop is pretty stunning and invokes the mood of a classic western with accuracy. As for the gameplay, there is not that much originality. The expanding reels and 1,125 paylines don’t quite match the level of the latest Megaways™ slots, but when combined with the extra multipliers can drive some good wins. All in, a decent enough game for high risk fans and one of iSoftBet’s bette releases or recent times.