The second in Thunderkick’s Beat the Beast series is a high variance game coming at you from Ancient Egypt, with 9 fixed paylines and simple gameplay that centres around free spins and wilds, and some high paying symbols that can unlock a top payout of 4,444x. 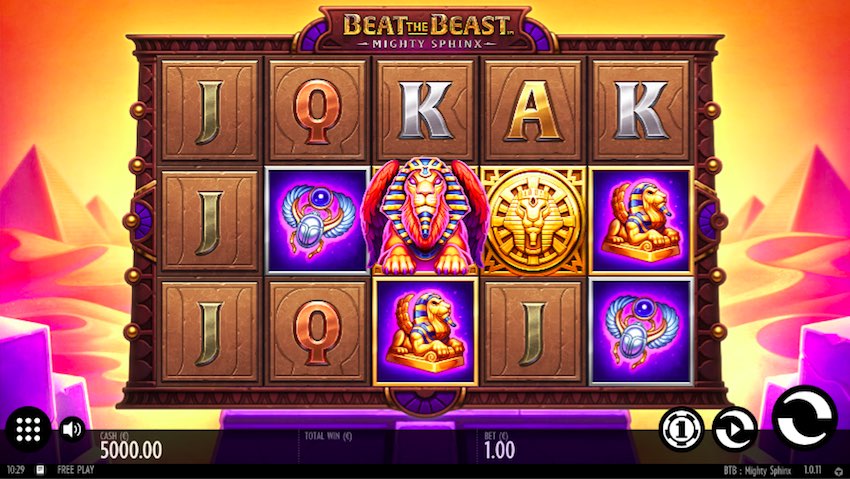 Where Can I Play Beat the Beast: Mighty Sphinx Slot?

ALL ABOUT BEAT THE BEAST: MIGHTY SPHINX SLOT

We are big fans of Thunderkick here at The Slot Buzz. They have created some of our favourite games of recent years in titles like Pink Elephants (with its sequel due for release later this year) and Fruit Warp. Their back catalogue is stacked with bizarre and wonderful games with quirky creatives, some nice innovative features and a few with a decent high variance. So we were really excited to hear back in January that Thunderkick were ready to release a series of high risk slots called the Beat the Beast. The first of that group was Release the Kraken, a decent enough game with a 7,000x potential, expanding wilds and free spins. It didn’t set the world on fire in quite the way we hoped, but it had its moments, and it is intriguing to see what the follow-up has to offer. Turns out it’s pretty much more of the same – the action is desert-based, with the Kraken replaced with a towering Sphinx. The potential has dropped a bit, and the features are somewhat lightweight – Free Spins and Wild Upgrades being the highlights of the show. Nevertheless, Thunderkick fans and high risk slotters looking for their next trip will get a kick out of Mighty Sphinx as it it’s a good-looking beast with a simple charm.

Mighty Sphinx is pretty much instantly recognizable as a Thunderkick slot thanks to the simple graphical style – the Egyptian desert behind the intricately-carved reel set has a cartoon feel and is bathed in oranges and purples. There are 5 reels and 3 rows in the game and 9 paylines in play at any one time. You’ll need to land 3 or more identical symbols across these lines simultaneously to score a win.

The low value symbols are the cards, 10 through to Ace. The premium symbols come in the form of a Sphinx Statue, scarab beetle, Ankh Crosses and Khopesh Swords. The highest value symbol of all is the Sphinx that scores a whopping 250x for five on a payline. The Wild also pays out 250x for five on a payline, as well as subbing for all other icons. Finally, there is a Golden Sphinx as well which will be key in unlocking your free spins, so look out for that one.  It also brings up to 200x when it lands.

Like all five of the slots that will eventually make up the ‘Beast’ series from Thunderkick, Mighty Sphinx is a high variance title designed to scare the pants of any casual slotter but fire-up the high-risk fanatic for an epic duel. It comes with a lesser top payout than its predecessor, at 4,444x, and a pretty standard Thunderkick RTP of 96.14%. Choose your stake with care, with options starting from 10p per spin.

Mighty Sphinx is a simple slot, not overly packed with features, with all the action driven by unlocking free spins – the Sphinx emblem is the key throughout.

Triggered at any point in the base game, this feature adds three Sphinx symbols onto the reels before a spin. This gives you more chance of unlocking the free spins round.

Land 3 or more Sphinx scatters anywhere on the reels and you’ll set up the free spins round as well as scoring a big win:

During the free spins round it is possible to land an additional 5 free spins by landing three more Sphinx symbols.  The Mystery Feature is also valid here which can increase your odds of adding more spins to your total.

During the Free Spins round, one of the premium symbols is transformed into a wild for the duration of the round.

Mighty Sphinx is a nicely-built high variance slot that will appeal to the high risk fans out there. It’s gameplay is simplistic, but that doesn’t need to be a negative – some of the best high volatility slots are like that. It’s really just about unlocking the free spins and hitting big wins through the high paying wild and Sphinx symbols. There are no multipliers or other enhancements, but still a very decent 4,444x top payout to aim for.